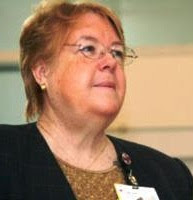 An immediate double stand is evident. For example, Cardinal Sean Brady, Primate of all Ireland, has decided that he will remain as head of the Church in Ireland though he admits that he was part of a 30 year cover up of the sexual abuse perpetrated by Father Brendan Smyth.

He had decided for himself that he will remain in authority within the Church until he retires.Sister Margaret acted as part of an ethics board at St Joseph’s Hospital, Phoenix, Arizona.

The board, including Sister Margaret made the decision that terminating the pregnancy in the third month of pregnancy was only possible way the doctors had any chance of saving the mother’s life.“In this tragic case, the treatment necessary to save the mother’s life required the termination of an 11-week pregnancy,” the hospital said in a statement.

He pointed out glaring double standards which the Church holds when dealing with ordained people.“Let us just note that the Roman Catholic hierarchy suspended priests who abused children and in some cases defrocked them but did not normally excommunicate them, so they remained able to take the sacrament,” said Kristof.He went on to quote an email he had received from an acquaintance that works in a hospital lamenting the fact that Sister Margaret had been forced to resign from her position “at the bishop’s request”. It said “True Christians, like Sister Margaret, understand that real life is full of difficult moral decisions and pray that they make the right decision in the context of Christ’s teachings. Only a group of detached, pampered men in gilded robes on a balcony high above the rest of us could deny these dilemmas.” Unfortunately, Sister Margaret has not yet released a statement on her situation. While the Catholic Church is entitled to its views this episode shows their leaders to be rigid dogmatic and out of touch.

It also seems that they do not care about the clear hypocrisy which they are demonstrating through cases such as Sister Margaret’s.