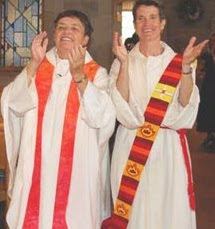 Two funerals this month find women ordained as Catholic priests buried outside the church they were striving to change from within.

Mary Styne, 70, of Milwaukee, died May 12. She was ordained in 2009 by Roman Catholic Womenpriests, an organization that has been ordaining women to the priesthood in contravention of church law since 2002.

Janine Denomme, 45, of Chicago, died May 17, just weeks after her ordination by the same group; her funeral was May 22.

The women, both of whom died of cancer, are the first members of Roman Catholic Womenpriests to pass away.

The group now has more than 100 bishops, priests and deacons worldwide, mostly in the United States.

Women presided over both funerals.

While Styne's death and funeral were quiet, Denomme's drew renewed media attention to the battle lines running through the Catholic Church over women's ordination.

While Styne knew the Catholic hierarchy would never allow her funeral in a church and arranged for services at a nonsectarian chapel, Denomme's survivors asked to hold her funeral at St. Gertrude, the local parish she loved.

"Those who willingly separate themselves from the church cannot be granted a church funeral unless they gave some sign of repentance before death," it said in a statement.

The Chicago Archdiocese said Denomme's excommunication resulted automatically from her participation in a "simulation" of ordination on April 10, five weeks before her death.

The church's decision to refuse burial upset many members of the progressive North Side parish, as did the fact that many of the conservative Catholic websites and blogs covering the story dwelt on how Denomme was a lesbian.

Some of the parishioners will meet Tuesday to discuss how or whether to formally respond.

"She followed her conscience," said Barbara Zeman, a Roman Catholic female priest in Chicago. "They threw her, and us, away."

Denomme expected to have her funeral at St. Gertrude, Zeman said. She went into the hospital almost immediately after her ordination, so she never had the experience of being excluded from the life of the parish that other female priests know.

Denomme was ordained to the deaconate in July 2009, a few months after being diagnosed with colon cancer. Over the next year, she chronicled her disease in a blog, which she saw as her ministry. The site attracted more than 23,000 visitors.

Bishop Joan Houk, of Roman Catholic Womenpriests' Great Lakes region, recalled that Denomme was so ill at her priestly ordination in April that she needed to lie in an upstairs chamber, rather than in the main sanctuary with the other candidate for ordination.

Houk shuttled back and forth between the two rooms to administer the sacrament.

Houk said the priests in her region thought the archdiocese's refusal to bury Denomme was senseless but unsurprising.

'Constant Denial to the Women'

"I see the constant denial to the women," Houk said in an interview at the wake. "Denial of community, denial of ministries such as lecturing or Eucharistic minister. They deny us the opportunity to pray on Catholic property."

Denomme's funeral was held at First United Methodist Church in a northern Chicago suburb, or "St. Gertrude's North," as a speaker at her wake irreverently dubbed it, to cheers and applause.

Styne's funeral was held in the Chapel of the Chimes at Wisconsin Memorial Park and she was buried by the funeral home Church and Chapel.

In Denomme's case, some parishioners said the archdiocese had told Rev. Dominic Grassi, pastor at St. Gertrude, that if he celebrated the funeral Mass at the parish it would be the last he'd ever say. Grassi declined to speak publicly about his conversation with Bishop Francis Kane.

"There was no way that our pastor could just go forward with a funeral," said Valency Hastings, a parishioner at St. Gertrude for eight years. "He would have been punished."

The Congregation for the Doctrine of the Faith, the Vatican's watchdog committee for doctrinal matters, declared in 1976 that women could never be priests because Jesus and his apostles were all male, and canon law codifies that stricture. Pope John Paul II, predecessor to the current pope, decreed an end to the ordination debate in 1994 in an apostolic letter.

Denomme's path to the priesthood began in her hometown of Detroit, where she played Mass with her three brothers, pretending to consecrate Chex cereal.

She came to Chicago in 1987 as a member of the Jesuit Volunteer Corps and worked with homeless women. Most recently Denomme worked as youth program director at Center on Halsted, a community center serving gays, lesbians and transgendered people.

"I remember her wearing a T-shirt: 'JVC – Ruined for life,'" said her friend Rosie Gianforte in the eulogy. "She would say that her life was 'ruined' because she understood in a whole new way the inequalities and injustices in the world and once her consciousness had been raised, she was never the same again."

Friends and fellow parishioners at St. Gertrude described her as "gentle," "a peacemaker" and possessing the gifts of mediating disagreements and drawing out the talents of others. She was heavily involved at St. Gertrude: singing at Mass, volunteering as a spiritual director and religious teacher and preaching in the church's lay preaching program.

"She was really well-liked in the parish," Grassi said. "Loved."

Parishioners and female priests reacted to the archdiocese's decision with a mix of anger, sadness and forgiveness.

Lersch, a parishioner for eight years, voluntarily brought communion to the sick at a local long-term care facility; as such, she was officially representing the parish to the secular world.

But after the parish chose not to bury Denomme, she didn't feel she could go on as the church's representative.

"I did not feel comfortable representing that decision," she said. "It was time to go. A line had been crossed."

Other parishioners said they struggled to extend forgiveness. Ruth Giles-Ott, a parishioner for 15 years, said she attended a faith-sharing meeting on May 10 where the group members discussed the archdiocese's decision.

Christians are called to "radical love," she said, and that includes Cardinal Francis George.

Hastings said the parish has moved past anger into reconciliation, which is what Denomme would have wanted.

At the same time, "Cardinal George has to face these tough questions about the lack of compassion to someone who dedicated her whole life to the church and the hypocrisy we see in not carrying out the basic act of buying the dead," she said.