Pope: The Trinity dwells in us from the day of baptism, with the help of priests 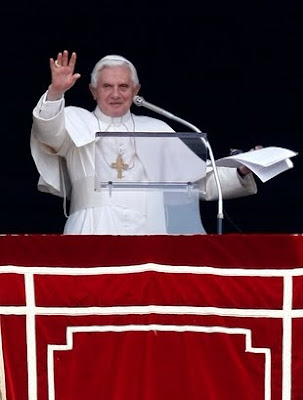 "The divine Trinity .. dwells in us the day of Baptism: 'I baptize you - says the minister - in the name of the Father and the Son and the Holy Spirit."

On Holy Trinity Sunday, the theme of his Angelus reflection today in St. Peter's Square, Benedict XVI did not seek to explain the mystery of God with theological or philosophical reflections, but like the Church Fathers, he indicated its presence in Christian life.

"The mind and language of the human - said the Pope - are inadequate to explain the relationship between Father, Son and Holy Spirit."

Every time we make the sign of the cross, he added, we remember "the name of God in whom we were baptized."

The Pope then quoted the theologian Romano Guardini, who speaking about the sign of the cross, observes: "we do it before prayer, so ... it brings us spiritually to order, to focus our thoughts, heart and will o God; we do it after prayer, so that what God has gifted us may remain in us ... It embraces the whole being, body and soul ... and everything becomes consecrated in the name of the triune God "( Lo spirito della liturgia. I santi segni, Brescia 2000, 125-126).

Consciousness and experience of the Trinity is deepened by the priest. After months in which the media limits itself to exclusively discussing the problem of paedophile priests, the pontiff offers some positive points of the work of priests in the Church.

Referring to today's Gospel, where Jesus promised the Apostles that "when he comes, the Spirit of truth, he will guide you to all truth" (Jn 16:13), the Pope added: "This is what happens in the Sunday liturgy, when priests dispense from week to week, the bread of the Word and the Eucharist. Even the holy Cure d'Ars reminded the faithful: 'Who welcomed your soul – he would say - when you first entered life? The priest. Who feeds your soul and gives it the strength to make its pilgrimage? The priest. Who will prepare it to appear before God, bathing it for the last time in the blood of Jesus Christ? Always the priest ... '(Letter Proclaiming a Year for Priests).

After the Marian prayer, Benedict XVI recalled that today, in the basilica of St. Maria Maggiore in Rome the beatification ceremony took place of Maria Pierina De Micheli, religious sister of the Institute of the Daughters of the Immaculate Conception in Buenos Aires: " Giuseppina - this her baptismal name - was born in 1890 in Milan, to a deeply religious family, where different vocations to the priesthood and consecrated life flourished. At 23 she started down this road devoting her time to educational service in Argentina and Italy. The Lord gave her an extraordinary devotion to his Holy Face, which always sustained her during times of trial and illness. She died in 1945 and her remains were laid to rest in the Institute of the Holy Spirit in Rome. "

Greeting pilgrims in French he then asked their prayers for his apostolic visit to Cyprus June 4 to 6 next, where he will present the working guidelines (Instrumentum laboris) in preparation for the Synod of the Churches of the Middle East in October.

Finally, in greetings to the Italian-speaking pilgrims, he mentioned a group of faithful from Pordenone, who came to Rome to honour the memory Card. Celso Costantini, a volume of whose Diary was submitted two days ago in Rome, entitled On the edge of war (1938-1947).

"This publication - explained the Pope - is of great historical interest. Cardinal Costantini, very close to Pope Pius XII, wrote it when he was Secretary of the Congregation of Propaganda Fide. His diary bears witness to the immense work accomplished by the Holy See during those dramatic years to promote peace and help all the needy. "

SIC: AN
EDITED BY Sotto Voce