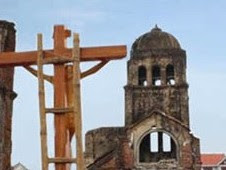 Protests have erupted across Vietnam after two Catholic priests were beaten brutally, allegedly by plain-clothed police and pro-government thugs.

The Bishop’s Office of the diocese of Vinh in a statement released on Monday night condemned the attacks on Fr Paul Nguyen Dinh Phu and Fr Peter Nguyen The Binh both of whom are still in critical condition, VietCatholic reports.

The statement also noted that plain-clothed police and pro-government thugs in Dong Hoi city had attacked anyone on the street wearing Catholic symbols.

In particular, a local woman, Mrs Nguyen Thi Yen, and her 9 year old son were punched and kicked brutally by the same gang. Some Catholic families reportedly have to flee the city in search of safety.

News of the assaults on the said priests and other attacks on Catholics at Dong Hoi city enraged Catholics throughout the country, VietCatholic says.

In Ho Chi Minh City, on Monday night, more than 2000 Catholics attended a Candlelight Vigil held at the Redemptorist Monastery of the city demanding Vietnam government to stop immediately the overt persecution against the Church and its innocent people.

Almost simultaneously with the Vigil in Saigon were special services at local churches and at Thai Ha Redemptorist Monastery in Hanoi drawing thousands of Catholics.

On Monday night, in Nghe An, Ha Tinh, and Quang Binh, thousands of Catholics marched on the streets praying Rosary. Peaceful protestors demanded the immediate release of seven Catholics who have been detained since the violent police raid at Tam Toa a week ago.