A Brazilian Archbishop is Vindicated-- Or Is He? 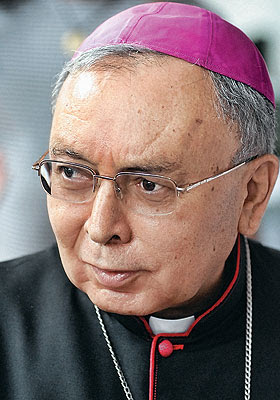 Earlier this month, after several weeks of heated debate and background maneuvering within the Vatican, L'Osservatore Romano published a statement from the Congregation for the Doctrine of the Faith (CDF), reaffirming the Church's absolute prohibition on direct abortion, and confirming that involvement in procured abortion merits the penalty of excommunication.

That CDF statement was a vindication for an embattled Brazilian archbishop, whose public stand against abortion had been criticized by-- of all people-- the president of the Pontifical Academy for Life.

But that vindication was long overdue, and the short, impersonal notice in the Vatican newspaper fell far short of the apology the archbishop deserved.

The details of this intramural Vatican intrigue remain murky, but the story is a remarkable one, illustrating the entrenched power of the Vatican bureaucracy-- specifically, the Secretariat of State-- and the immense difficulty that even an archbishop can face when his plea for justice runs counter to the interests of that bureaucracy.

The story began with a public controversy in Brazil, over the case of a 9-year-old girl who was pregnant with twins. Archbishop José Cardoso Sobrinho of Olinda and Recife drew heavy criticism in the Brazilian media when he insisted that the unborn children should not be aborted, and reminded everyone concerned that the Church stipulates the penalty of excommunication for anyone involved in direct abortion.

When the abortion was done despite those warnings, the archbishop reluctantly announced that the adults involved had brought that canonical penalty upon themselves.

Thus far the case was straightforward. Under extreme circumstances, Archbishop Cardozo had applied the clear and unswerving teaching of the Catholic Church. No doubt he realized that his stand would be politically unpopular, and he was prepared to take the inevitable criticism.

But Archbishop Cardozo could not have anticipated that some of that criticism would come from the Vatican. Rather than offering public support to the Brazilian prelate, the president of the Pontifical Academy for Life joined forces with the critics .

In an article for L'Osservatore Romano, Archbishop Salvatore Fisichella defended the Brazilian doctors who had made the "arduous decision" to proceed with the abortion, and suggested that Archbishop Cardoso had taken a harsh and inflexible stand that "unfortunately hurts the credibility of our teaching."

That article in L'Osservatore Romano gave many secular reporters the impression that the Vatican was shifting its position on abortion, suggesting that under some circumstances a direct abortion could be justified.

Archbishop Fisichella surely did not intend to convey that message, but as president of the Pontifical Academy for Life he is expected to handle such issues with clarity, and in this case he definitely did not.

Apparently this influential Vatican official had drawn his understanding of the case entirely from the sensationalistic Brazilian media accounts, which were written by critics of Archbishop Cardoso.

Naturally the Brazilian archbishop was upset. He asked for an opportunity to present his own side of the story in L'Osservatore Romano, to set the record straight. His plea was ignored. He hinted that he might file a canonical lawsuit to clear his reputation; that threat too was ignored.

Then on July 1 the Vatican announced that Archbishop Cardoso's resignation had been accepted by Pope Benedict XVI. It's true that he was 76 years old: a full year beyond the normative retirement age; his retirement was overdue. Still, in light of the controversy swirling around him, the timing of his announcement was certainly not helpful to the archbishop as he sought to defend his reputation.

Meanwhile, Archbishop Fisichella was coming under pressure, too. A solid majority of the members of the Pontifical Academy for Life-- 27 out of 46-- wrote to protest their president's public criticism of the Brazilian archbishop.

Still Archbishop Fisichella was unmoved. He replied that he would not issue an apology, and did not regret penning the column in L'Osservatore Romano, because he had been asked to write it by the Secretariat of State.

Imagine: the article in L'Osservatore had given an inaccurate presentation of the facts, a misleading perspective on an important Church teaching, and an unfavorable portrayal of a Church leader who was doing his job under difficult circumstances.

Yet all these faults were irrelevant, Archbishop Fisichella seemed to suggest, because the Secretariat of State wanted that message aired! The bureaucratic imperative trumped the demands of justice and charity.

Now, thanks to the new CDF statement, the record has been set straight. But the damage has been done. Scores of newspaper articles are in print, claiming that the Catholic Church will accept abortion under extreme circumstances.

Thousands of people have been led-- by the Vatican newspaper-- to believe that the penalty of excommunication is too severe. A brave archbishop's critics have been emboldened. And worst of all, even the "clarification" from the CDF fails to acknowledge the damage that has been done.

So, the mom and the doctor were excommunicated, but the rapist stepfather was not. And, gosh, forcing a 9 year old to bear a child, much less twins is not life threatening? But no, the writer is concerned that the Church will be misunderstood for condoning abortion in some circumstances. I think what the Church in Brazil is probably feeling is contempt.