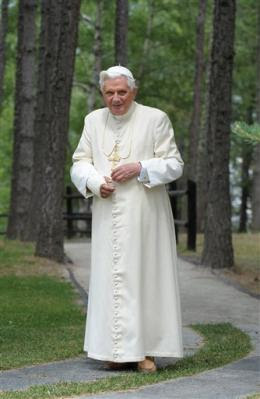 Pope Benedict XVI broke his wrist when he tripped in the dark looking for a light switch; he did not slip in the bathroom as reported earlier, the Vatican spokesman said.

Jesuit Father Federico Lombardi, who was at the Vatican July 17 when the pope fell and underwent a surgical procedure to align the bones in the wrist, later joined the pope and his entourage at the Salesian-owned Alpine chalet in Les Combes, Italy, where the pope was staying July 13-29.

Father Lombardi, who initially had said the pope slipped in the bathroom, was asked July 27 for a fuller explanation of how the pope fell.

He told the Italian TV news channel Sky TG24: "It's very simple. The pope got up during the night in a dark room -- a room different from the one where he sleeps in Rome. He was moving around looking for the light switch, tripped on the leg of the bed, fell and hurt himself. That's all.

"The next day, it was swollen and still hurting. Nevertheless, the pope wanted to celebrate Mass. Then the doctors were called and they said it was best to go to the hospital," Father Lombardi said.

Just over a week later, X-rays showed the fracture was healing well.