Vatican diplomat calls for an end to witchcraft 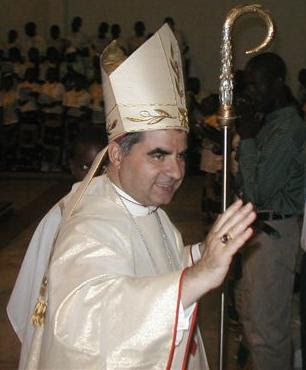 The outgoing papal representative in Angola and Sao Tome & Principe, Archbishop Angelo Becciu, has called for an end to witchcraft accusations against children.

During a mass marking the 124th anniversary of the Santa Ana Church in Caxito, the Nuncio affirmed that, "the charges are a frequent practice on the African continent and they must be eliminated."

Reports say the although most Angolans say they are Catholic, belief in witchcraft is widespread in a country recovering from an almost three-decade long civil war and where an estimated two thirds of the population are poor.

Children are accused of witchcraft, resulting in their abuse, abandonment and, in some cases, death.

It appears more frequently among the Bakongo people, concentrated in the Uige, Zaire and Cabinda provinces in northern Angola. The situation is becoming of grave concern as atrocities against children increase by the year.

Last year 40 children were rescued from the premises of a group calling itself the Evangelical Church of Traditional Healing.

State media reported the children, some just babies, had been made to fast for 15 days, had been burned on their arms and had perfume poured in their eyes.

The Angolan government says it is taking the problem seriously and there has been much public discussion about these so-called sects which are often, according to state media reports, linked to Congolese immigrants.

During his visit to Angola earlier this year, Pope Benedict XVI called on Angola's Catholics to work to convert believers in witchcraft, in a country where traditional and new sects are proliferating. "So many of them are living in fear of spirits, of malign and threatening powers. In their bewilderment they end up even condemning street children and the elderly as alleged sorcerers," he said

The Hollywood movie "Girl Soldier" will portray the heroism of Sister Caroline, an Italian nun, who managed to rescue 109 girls captured by the Lord's Resistance Army in Uganda who were made soldiers and sex slaves.
While sojourning in the beautiful L'Aquila region of Italy, that was struck by earth tremors this year, an Australian journalism muses about the shake-up needed in Italy to jolt it out of the natural disaster of a demographic demise.

The Nuncio called on the Christians to follow the example of Santa Ana (Patron Saint of Caxito), promoting mutual respect within families and the preservation of moral values.