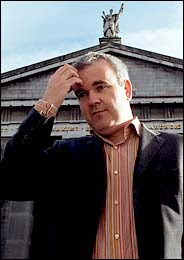 THE GOVERNMENT’S proposed Civil Partnership Bill will create “a second-class form of marriage for what the Government clearly feels is a second-class group of people”, according to Amnesty International.

The executive director of the organisation’s Irish section, Colm O’Gorman, said the failure of the Bill to legislate for the children of gay couples was “cowardly”.

Delivering the annual Amnesty International Pride Lecture in Belfast last night, he said the Government was “enshrining discrimination in Irish law” at a time when other countries were moving forward and ending inequalities.

“Failure to provide full marriage equality means that same- sex couples will not have full protection under the law. In effect, it is creating a second-class form of marriage for what the Government clearly feels is a second-class group of people.”

Mr O’Gorman said the Bill’s most serious weakness was its failure to provide for the children of gay couples, creating insecurity for families. “A same-sex couple will not be allowed jointly adopt their children. Children raised by same-sex couples will be denied the same protection as other children because the Irish Government chooses not to acknowledge their existence and denies their rights.

“These children will be discriminated against because the Government has decided to discriminate against their parents.”

Mr O’Gorman said this undermined the rights of children “on the basis of ill-informed arguments rooted in a bigotry that still exists in a small and increasingly marginalised section of Irish society”.

Referring to scare stories in the media, Mr O’Gorman said: “This is the kind of thinking that sees gay people as something ‘other’, something to be afraid of and defended against, as a community that has no place in normal society.”

He added that there were positive aspects to the legislation and said he recognised that some people characterised it as a step towards equality for gay couples. “But in a way it shows us just how far short of equality we actually are that human-rights activists can be expected to settled for this.”

Mr O’Gorman’s address followed a decision by the Northern Ireland Parades Commission not to place any restrictions on Saturday’s Gay Pride parade through Belfast, the second year this decision has been made. Opposition to the march is expected from some religious groups, a likelihood anticipated by Parades Commission chairwoman Rena Shepherd.

“We respect the views of those who are organising the Pride parade and those who wish to express their opposition,” she said.