Pain and struggle of survivors palpable as questions remain 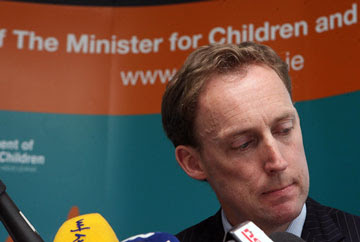 FINGERS were jabbed through the air, thick with recrimination and hurt – the only surprise is that for once the Government wasn’t the target.

Michael Waters, the grey-haired spokesman for Survivors of Child Abuse (Soca) UK, had spoken coherently and concisely about his experiences of social work and had questioned Children’s Minister Barry Andrews about plans to boost resources in the area.

Then, suddenly, he stood up and made his way onto the stage at the Government Press Centre.

He pointed first at the screens behind Mr Andrews and his two colleagues, and the words "Report of the Commission to Inquire into Child Abuse".

Then he turned his guns on John Kelly, sitting in the front row, the spokesman for SOCA Ireland.

"Mr Kelly, you boycotted this committee," Mr Waters said. "You called it a toothless tiger."

His ardour rising, he said if people had listened to Mr Kelly, little would have been achieved for survivors. "You should be ashamed of yourself," he said. "You are a coward." There is little doubt that Mr Kelly strongly disagrees.

Maybe it was no surprise that emotions ran high yesterday.

For the victims of institutional abuse any efforts to make up for the past, no matter how well-intentioned, is going to be too little, too late. Any pledges to ensure such horrific abuse cannot be perpetrated in future is likely to be met with scepticism, anger and frustration.

Having been ignored for so long, the survivors from various interest groups are determined to have their say. Among those listening to the minister’s promises yesterday was Michael O’Brien, the former mayor of Clonmel whose explosive performance on Questions and Answers burnt a hole in TV screens around the country in the aftermath of the Ryan Report’s publication.

"I feel ashamed as a citizen of this State that nothing was done years ago to protect children," he boomed. He said he had had to bare his soul on Questions and Answers, and that the ball was now in the minister’s court.

The Implementation Committee could not, he said, become a body that meets up "to have tea and coffee and run away".

Bernadette Fahy, of the Aislinn Centre, asked why some childcare settings were the subject of scheduled inspections, while another survivor, Victor Hackett, said the lack of aftercare for those in the care system now was "a major problem".

Other problems abound, despite the welcome afforded many of the measures announced yesterday.

The implementation plan does not mention those who suffered abuse in Magdalene Laundries, or those who were traumatised in psychiatric institutions and hospitals.

One speaker, Olive Wilson, said these facilities were often "dumping grounds" in the past. Abuse survivors who moved away to Britain and elsewhere are also seemingly outside its scope.

Paddy Doyle, whose eloquence and insight has been a feature of recent months, asked why those who engaged with the Redress Board were still subject to legal "gagging orders" preventing them from speaking about their experiences.

Unlike other speakers, his voice didn’t buckle under the strain, and he joked about not wanting to tell the minister how to do his job. However, he also questioned the mandate of some of those who are speaking on behalf of the thousands of victims.

"The first question that you might consider asking is, ‘who are you?’," he instructed Mr Andrews.