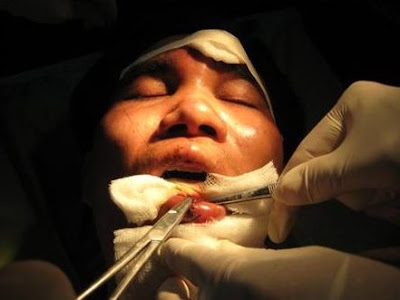 General Hoang Cong Tu, from the Ministry for Public Security has denied there has been any violence against priests from Dong Hoi, and the police have rejected as "false" criticism from the Diocese of Vinh, that accuses the police of having beaten priests and faithful.

In response, the diocese has circulated on the Internet pictures of priests and of the deep wounds caused by thugs in police employment.

Gen. Tu has also announced that seven faithful will be tried for "disorder", having built a tent to use it as a place of prayer in front of the ruins of the church of Tam Toa (Vinh diocese).

Two days ago AsiaNews broke the news of the beating of two priests admitted to the hospital in Dong Hoi (28/07/2009 see: Priest beaten into a coma by police. Catholics Protest throughout Vietnam). One was beaten by thugs in the street, under the gaze of at least 30 policemen and one – who went to visit his fellow priest in the hospital - was beaten and hurled from the second floor and is still in coma.

The doctors who treated Fr. Peter Nguyen The Binh (see photo), in a coma, said yesterday that he has escaped death, but his condition remains very serious. The other priest, Fr Paul Nguyen Dinh Phu, who sustained broken ribs and head injuries, is better, but needs further treatment in Xa Doai hospital.

The priests were violently attacked during the demonstrations of prayer and protest held in the diocese of Vinh (300 km south of Hanoi), following the arrest of 7 Catholics accused charged with a crime for having erected a tent to use as a chapel in front of the ruins of the Tam Toa church (see AsiaNews 21/07/09 - Beatings and arrests of priests and faithful in the historic church of Tam Toa). The police raid against the faithful gathered in Tam Toa left at least 100 people injured.

On July 28, at a press conference held in Hanoi in the office of the Ministry for Communications, Gen Tu, Deputy Director General of the Department of Homeland Security, announced that the seven Catholics will be prosecuted for having caused chaos in front of a monument.

Fr. Anthony Pham Dinh Phung, secretary of the diocese denounced the decision as unfair. The priest also revealed that the Vietnamese government had contacted the diocese demanding that it calm down the anger of the faithful against police violence. Fr. Pham said that "we will not call for calm until the 7 Catholics are released”.

The accusations against the seven police are endless: "counter-revolutionary activities" for violating the site of a memorial to Americans war crimes, public disorder, assault of public officials.

The police also published the news that the seven Catholics "have confessed their sins and begged to be pardoned”. They have also revealed the names of "several others" involved "in the illegal construction of a house in the historic site”. Among them is the name of the Parish Priest of Tam Toa, Fr. Le Hong Thanh.

The state media, which has begun a heavy propagandist campaign against the Catholics of Vinh, accuse Fr. Le Hong Thanh of encouraging the arrested Catholics and "deceiving others" in the "illegal construction".

Among the wounded and beaten by police last July 20, there is also a nun from the congregation of the Sisters of the Lovers of the Cross, Sister Maria Tan, who was beaten and almost arrested. Some faithful wrested her from the hands of the policemen who were about to load her onto a truck.

In the following days, the Diocese of Vinh condemned the police brutality, their use of tear gas, their baton charging and arrest of the faithful.