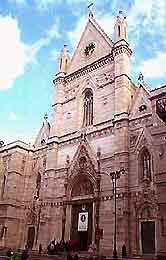 The Jewish community of Naples has raised funds to help rebuild the bell tower of a church damaged in an earthquake.

The Italian Catholic news agency SIR this week quoted Naples Rabbi Pierpaolo Pinhas Punturello as saying that he had been inspired to act on behalf of the church in the city of L'Aquila at the Passover seder, which took place shortly after last April's quake.

"I was struck by the words at the beginning of the seder, 'whoever is hungry, come and eat, whoever is needy come and celebrate the Passover with us,' " he said.

Punturello made contact with emergency rescue operations coordinating aid to the devastated area.

"Never before had I realized so strongly that as a Jew, and as a Jewish community, we had to do something for everyone who was hungry and in need," he said.