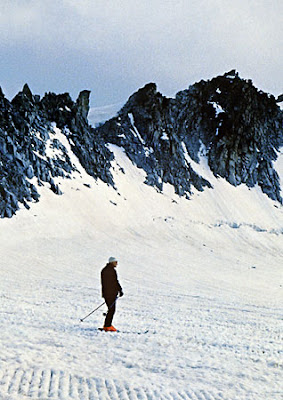 Pope Benedict recently broke his wrist in Italy while kicking back at his ski chalet. Ironically, it was not while skiing.

Apparently, Benedict does not take after his predecessor, John Paul II, who was a Lifelong skier as well as hiker and kayaker.

According to skiinghistory,org, Karol Wojtyla was skiing's most exalted devotee.

While Bishop and Cardinal in Poland, John Paul II spent many weeks each year at Poland's largest resort, Zakopane. While there he would stay at a local convent where, until this day, the sisters still have a pair of his leather ski boots.

Just seconds after his inauguration as the 264th successor to St. Peter and Pontiff of the Roman Catholic Church, John Paul II exclaimed, "I will ski again when they let me!"

Before he became Pope John Paul II, he scorned lifts and preferred to climb on his hickory skis. Once a Pope, John Paul II modernized with a pair of 195cm Head skis which he considered "his one luxury in life" and began taking to the lift in order to follow protocol.

According to his secretary, Pope John Paul II made more than 100 clandestine trips to ski or hike in the Italian mountains and was rarely recognized by others on the slopes.

It was rumored that JP-II upon learning that he would need a hip replacement in 1984 immediately snuck off to the mountains east of Rome for one last sking day.