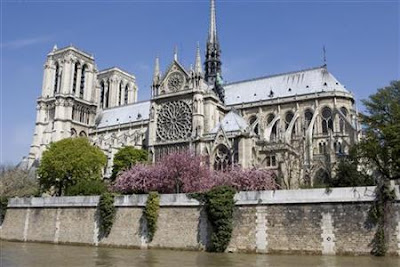 Ensconced in an unassuming hotel behind the main drag of Paris' Belleville district, 100 or so Chinese believers sing and sway, eyes closed and arms out, in a display of worship frowned upon in their atheist home country.

With rules on immigration easing on mainland Chinese coming to study and work in France, many are seeking out churches in Paris to ward off their feelings of isolation in a foreign land.

"There are a lot of students coming over from mainland China who feel lonely due to the language barrier, and seem to be searching for something," said an assistant at Paris' Chinese Evangelical Church surnamed Lee.

"A lot come to us to see if they can accept religion into their lives," said Lee, who left Taiwan for France in the 1960s.

Last Sunday, on a stage amid the pink taffeta remnants of a just-finished wedding party, a man read passages from the New Testament to the congregation to throaty shouts, in Chinese, of "Hallelujah!," "Praise the Lord!" and "Amen."

"When you finally let Jesus into your heart, you'll find he brings great comfort to your life," said one woman, who came to Paris over a decade ago and works as a restauranteur.

Immigration from China to France rose more than fivefold between 1994 and 2004, according to the Paris-based National Institute of Demographic Studies.

France, which does not keep official statistics on the ethnic make-up of its population, has also relaxed visa restrictions on individual travelers from mainland China.

Around 400,000 Chinese live in France, of which 90 percent are in Paris, estimates the Chinese Overseas Christian Mission.

China, run by a Communist Party which regards unofficial religious groups as potential threats to its power, demands its faithful attend state-sanctioned churches and regularly detains pastors and priests.

Officially atheist, China has about 40 million active Christians, evenly divided between state-run and underground churches, according to expert estimates.

Paris boasts nearly 30 Chinese churches, almost all of which are Protestant. The Chinese Evangelical Church's Lee estimates that there are around 2,500 Chinese Christians in Paris, with churches typically having congregations 100-strong.

In Catholic France, a secular country with deep Christian roots, some three-quarters of the French are baptized but less than a tenth of them attend Mass by most estimates.

During informal conversations, several Chinese churches said they saw new attendees every week from mainland China hoping to find a sense of community in their host country. Many students are drawn to youth group activities, church workers said.

Many new arrivals in Paris hail from the eastern coastal city of Wenzhou, renowned for its free-wheeling entrepreneurs and seen as a barometer of China's industrial economy. Services in Paris are conducted in the local dialect as well as Mandarin.

Wenzhou natives have set up shop around the world, including over 60 textile shops along Paris' Chemin Verts district.

Several were Christians before even leaving China.

"The first Christian missionaries entered China via port cities, so you find a lot of Chinese immigrants from those areas (Wenzhou and Fujian provinces) have actually been Christians for generations, but can only express it openly once they get here," said Zhang Jian, a Beijing native who became a pastor in France.

Wenzhou in particular has seen a blossoming of "house churches": Christians who refuse to register officially and so can only meet in private homes for fear of punishment.

Zhang left China after Beijing's suppression of student protests on Tiananmen Square in 1989. Zhang, who was shot in the leg and walks with a slight limp, said his world fell apart after witnessing the brutality of the event.

"We were taught our whole lives that the Communist party was our mother and father, that they were love itself. But if that's so, how could they have treated us that way?" he said.

Still, some see signs of change in China.

"There's more freedom to be Christian in China now as there's been so much international pressure, though you still have to register with the authorities," said one church member.

After singing pop-beat worship songs and pouring out personal stories, the mostly female, middle-aged congregation sits down again to pray. Some wipe tears from their eyes.