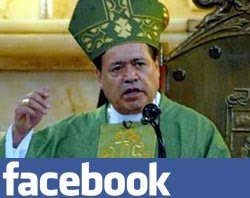 The Archdiocese of Mexico City said this week that a Facebook page supposedly created by Cardinal Norberto Rivera is the work of an anonymous person who is claiming to be the cardinal.

“Someone with perverse and evil intentions has usurped his name for the sole purpose of harming his reputation and lashing out against the Catholic Church,” the archdiocese said.

It called on authorities to investigate the incident and in conformity with the law file charges against those responsible.

“As the Holy Father Benedict XVI has said repeatedly, the Catholic Church will always support social communications and these technologies that constitute useful tools for all humanity; however, she will condemn their use for evil ends that endanger or go against the dignity of the person,” the archdiocese stated.

“Likewise, we respectfully ask those who control the content on Facebook to erase this profile, as it is a violation of several of our laws,” it said.