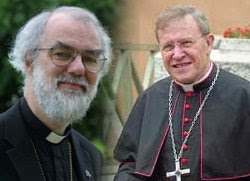 Vatican concerns about how some recent decisions of the U.S. Episcopal Church will impact the search for full Anglican-Roman Catholic unity are echoed in a reflection by Anglican Archbishop Rowan Williams of Canterbury, the head of the Anglican Communion.

Writing July 27 about the Episcopal Church's recent general convention, Archbishop Williams repeatedly referred to the need to keep in mind the ecumenical implications of local church decisions in addition to their impact on the unity of the Anglican Communion as a whole.

Archbishop Williams' reflection, titled "Communion, Covenant and Our Anglican Future," was published on the archbishop's Web site at http://www.archbishopofcanterbury.org/2502.

In a statement July 29, the Pontifical Council for Promoting Christian Unity noted Archbishop Williams' concern for maintaining the unity of the Anglican Communion through common faith and practice based on Scripture and tradition.

The Vatican office "supports the archbishop in his desire to strengthen these bonds of communion, and to articulate more fully the relationship between the local and the universal within the church," the statement said.

"It is our prayer that the Anglican Communion, even in this difficult situation, may find a way to maintain its unity and its witness to Christ as a worldwide communion," it added.

The Episcopal Church's general convention adopted two resolutions that may further strain relations within the Anglican Communion and with the Catholic Church: One affirmed that all ordained ministries, including the office of bishop, are open to all the baptized, including gays and lesbians; the other called for the collection and development of theological resources for the blessing of same-sex unions.

Last year the Lambeth Conference, a gathering of leaders from around the Anglican Communion, strongly urged all members of the communion to respect moratoriums on ordaining openly gay bishops and on blessing same-sex unions.

After their general convention, the leaders of the Episcopal Church wrote to Archbishop Williams, saying that their resolutions do not signal the end of the moratoriums, but rather describe the position of the U.S. church.

Pope Benedict XVI and his top ecumenical officer have said the Episcopal Church's position on homosexuality and its ordination of women as priests and bishops make full Anglican-Roman Catholic unity appear impossible.

Cardinal Walter Kasper, president of the Pontifical Council for Promoting Christian Unity, told the Lambeth Conference last year that what is at stake "is nothing other than our faithfulness to Christ himself."

While recognizing the Episcopalians' desire to respond to what they see as a pastoral need, he said the Catholic Church is convinced that its teaching that homosexual activity is sinful "is well-founded in the Old and in the New Testament" as well as in Christian tradition.

And, the cardinal said, the Catholic Church also believes the fact that Christ chose only men to be his apostles means the church is not authorized to ordain women.

Responding to challenges posed by modern sensitivities requires solutions that are clearly in line with the teaching of the Gospel and of Christian tradition, recognized not only by Roman Catholics, but also by the Orthodox and Oriental Orthodox, Cardinal Kasper had said.

In his reflection July 27, Archbishop Williams said the Anglican Communion clearly opposes prejudice against homosexual people and denounces any attempt to limit their civil liberties.

But, the archbishop said, "if society changes its attitudes, that change does not of itself count as a reason for the church to change its discipline."

"In the light of the way in which the church has consistently read the Bible for the last 2,000 years," he said, any major change in church practice must have "a strong level of consensus and solid theological grounding," as well as take into account "the teachings of ecumenical partners."

Recognizing the authority of and particular circumstances faced by local churches, the archbishop still insisted that a local church needs "some way of including in its discernment the judgment of the wider church. Without this, it risks becoming unrecognizable to other local churches, pressing ahead with changes that render it strange to Christian sisters and brothers across the globe."

Accepting major changes to church discipline and practice without the consensus of the entire communion, he said, "would be to re-conceive the Anglican Communion as essentially a loose federation of local bodies with a cultural history in common, rather than a theologically coherent 'community of Christian communities.'"

Archbishop Williams' reflection theorized that the future of the Anglican Communion may involve two styles of relationships: one that fully shares "a vision of how the church should be and behave," and another less formal style of associated churches that work together in areas of common agreement.