Benedict XVI to travel to Turin for Shroud exposition in 2010 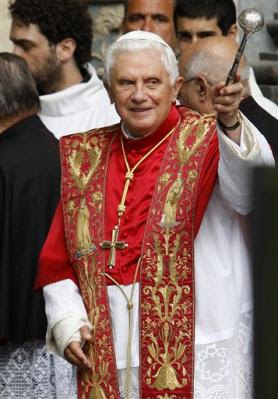 Vatican spokesman Father Federico Lombardi has confirmed that Pope Benedict XVI plans to attend the public exposition of the Shroud of Turin in 2010, although no exact date has been set.

Speaking on Vatican Radio, Father Lombardi said the Pope met with Cardinal Severino Poletto, Archbishop of Turin, for lunch in Aosta where he is vacationing.

The two discussed the public showing of the Shroud which will take place in the spring of 2010.

“Naturally, Cardinal Poletto informed the Pope about preparations for the event and once again invited him to attend. As he has mentioned in the past when speaking about the public showing, the Pope confirmed his intention to travel to Turin for the occasion, although the date still needs to be determined,” Father Lombardi stated.
+++++++++++++++++++++++++++++++++++++++++++++
Disclaimer