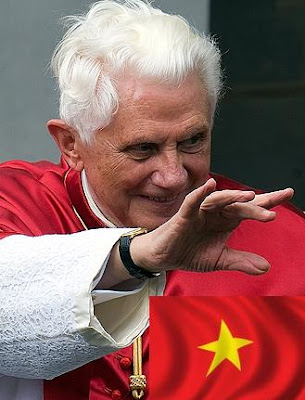 POPE Benedict XVI has named three new bishops for Vietnam as the Vatican works to restore ties with the Asian nation's communist government.

A Vatican statement on Saturday said that the pontiff had selected Monsignor Joseph Vu Duy Thong to be bishop of Phan Thiet, Monsignor Pierre Nguyen Van De to be bishop of Thai Binh and the Rev. Joseph Nguyen Nang to head the diocese of Phat Diem.

In two of the dioceses, the appointments were made to fill the posts of retiring bishops.

Last month, Pope Benedict expressed hope for a 'healthy collaboration' between the Roman Catholic church and the Vietnamese government, which cut off ties with the Vatican after taking power in 1954.

Vietnam's Catholic community numbers some 6 million and is one of the largest in Asia.

Tensions have existed for years between faithful and the government, which closely monitors religious groups and insists on approving most church appointments.

It was unclear if the government had voiced any opinion on the latest appointments.

But relations have recently begun to improve, and Vietnamese Prime Minister Nguyen Tan Dung became the highest official from his country to meet the pope when he came to the Vatican in 2007.

Earlier in the week, the Vatican-affiliated missionary news agency Asia News cited Vietnamese Cardinal Pham Minh Man as saying Vietnam's president would meet with the pontiff at the Vatican in December.

Prospects for such a visit are raising hopes among Vietnam's Catholics that the encounter could lead to diplomatic ties as well as yield an invitation for Benedict to make a pilgrimage to their country, Asia News said.

However, reports of thawing relations have sometimes been punctuated by a flare in violence. On Wednesday, clashes broke out in central Vietnam at a makeshift place of worship which had been erected by Catholics on the site where American bombs had destroyed a church during the Vietnam war.