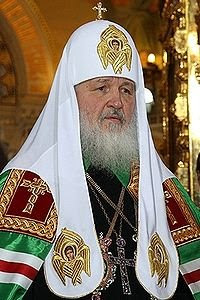 Patriarch of Moscow and All Russia Kirill expressed concern about the state of the environment, as well as mankind’s collective soul, saying the economic crisis has lessons to teach us.

The latest contributor to the ongoing verbal feud between the United States and Russia came from unusual quarters as the Patriarch of the Russian Orthodox Church took a swipe at the United States for its “reckless consumption.”

“If society embarks on the road of such recklessness consumption, our earth will go under,” Kirill told an audience of students and lecturers at the Kiev Theological Academy. “It has already been proven that if the average level of consumption of the whole world matches that of the United States… the basic resources will run out in 40 to 50 years.”

“God has not given us resources to live like this,” he warned.

It seems the Russian Orthodox leader has done his homework.

Professor Jared Diamond from UCLA has demonstrated in a recent article that the Western world is using up resources 32 times faster than in the developing countries.

“The average rates at which people consume resources like oils and metals,” Diamond argues, “and produce wastes like plastics and greenhouse gases, are about 32 times higher in North America, Western Europe, Japan and Australia than they are in the developing world.”

Diamond’s conclusion may not be exactly what the economists and developers want to hear, but it correlates with what Patriarch Kirill said: “Whether we get there willingly or not, we will soon have lower consumption rates because our present rates are unsustainable.”

Patriarch Kirill’s comments show a marked tendency for religious leaders to speak out about the environmental problems now facing the planet. Earlier this month, Pope Benedict XVI warned an audience in Sydney, Australia about the evils associated with “insatiable consumption.”

“Reluctantly we come to acknowledge that there are… scars which mark the surface of our earth… in order to fuel an insatiable consumption,” Benedict warned.

No need to live in a cave

Patriarch Kirill then provided his personal insights on the present economic crisis that would never be heard in a school of economics.

“In this sense, the crisis may teach us much – restraint and rational use of our financial opportunities,” he said. “The most important thing is to learn Christian asceticism.”

But Russia’s top hierarch was quick to point out that practicing asceticism did not necessarily imply living the life of a hermit.

This does not mean “life in a cave or permanent fasting,” the Patriarch explained. “It’s the ability to regulate one’s consumption and the condition of one’s heart, and win a victory over passions and instincts. It is important that the rich and the poor alike possess these qualities.”

The Patriarch then expressed concern that members of the eastern Orthodox societies were being exposed to degenerating “western system of values.”

“The trinkets of modern life make one giddy, and inebriate the human consciousness,” Kirill said. “People believe in advertisement, fashion, stereotypes, and this virtual world as if it were reality.”

The Russian Orthodox leader also blasted same-sex marriages, a new social-political phenomenon occurring in the West that has sparked uproar of debate on both sides of the sensitive issue.

“Until recently, nobody could even have thought that same-sex marriages would receive legislative support and would be put on par with natural marriages,” he said. “In Liberalism, every person is autonomous, both from God and from other people. He creates his own system of values and this ultimately leads him to losing his inner control.”

In the United States, same-sex marriages have been legalized in 6 of the 50 states, whereas the Russian capital refuses to permit gay rights activists from organizing parades along its straight streets.

Despite the heavy criticism leveled against western lifestyles, Kirill held out hope on the possibility for an East-West dialogue, but the dialogue should not be between a “horse and rider” but rather between equal partners.