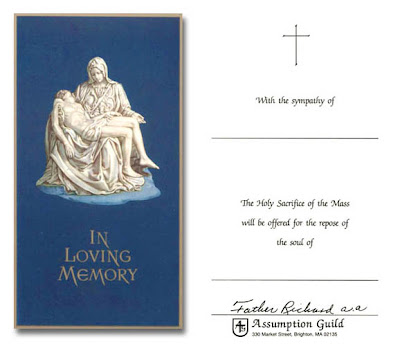 LAWS banning the sale of pre-signed Mass cards have come into effect to end a multi-million euro commercial activity which some Church leaders said had no spiritual value.

From now on, Mass cards will have to be signed by a priest in the company of those who request them, or can be pre-sold only by a "recognised person" – either a Catholic bishop or provincial of a Catholic religious order.

Some bishops had raised concerns that Mass cards were being sold, for about €5 each, and pre-signed by priests who were either dead or not in good standing.

One example was cards on sale in shops in Cork signed "Fr Joe Carroll" who was in fact Mgr José Carolo, an Italian priest who worked in Quito, Ecuador, and died two years ago.

Some retailers argued that the sale of pre-signed Mass cards was helping communities in developing countries.

A Longford Mass card supplier, David Hughes, told a Sunday newspaper recently he had sent €200,000 and built three churches in the Philippines by selling cards signed by a Bishop there.

The new laws are contained in Section 99 of the Charities Act 2009, which the Government has agreed to commence.

The junior minister with responsibility for charities regulation John Curran said this will ensure the good faith of people cannot be taken advantage of.

"The sale of pre-signed Mass cards in shops, as opposed to directly from the Catholic Church, has been a matter of public concern for some time. The concerns are twofold: One, will a Mass will actually be offered in respect of the specific intentions offered? Two, is there an element of profit behind the sale of such cards?" he said.

"A Mass card is purchased in good faith, and often at times of great sorrow to demonstrate a person’s empathy and concern for others. It is an inherently decent act. I believe people in such circumstances should have no doubt whatsoever that a Mass will be offered for their intentions. This is what section 99 will achieve," said Mr Curran.
+++++++++++++++++++++++++++++++++++++++++++++
Disclaimer

Since Fr. Larry White became Parish Priest of Our Lady Queen of Peace Parish in Bray in September 2002 all

are just "rubber stamped" with his signature by the Parish Secretary.

Is this or has this ever been LEGAL and the correct way to do things?

Said Certificates are actually printed and photocopied and as well as the "rubber stamped" signature the Parish Seal is imprinted on it.

You pay a fee (not a donation for each).

It is perfectly acceptable to have a fee for all of the above as an administration charge, except for a Mass. Unsigned Mass cards, like any card, have a cost price and they can be sold on - unsigned - at a reasonable profit. A recommended donation is sometimes stipulated, but if someone approaches a priest asking for Mass to be offered and they genuinely have no ability to make a donation, then that priest cannot refuse.

However, what none of the above addresses is how it is possible to offer, for example, 100 Masses for every person who dies? If everyone who sympathises with the mourners has a Mass offered, then when will it be possible for a diminishing number of priests to offer all these Masses? Especially when a priest is only supposed to have one Mass per day (2 on Sunday), and this is usually taken by the public Mass he offers in his parish. Many questions, few answers...

Very interesting to hear of the last person who I assume is a member of the clergy talk about the public Mass on a Sunday for the people of the Parish.

That had always been the norm for over 21 years in Queen of Peace Bray when the Parish Priest always left a Sunday Mass in the diary for the people of the Parish and no bookings were allowed for other intentions.

However since the new PP was installed there Fr. Larry White in 2002 there has NEVER been a Mass said for the people of the Parish any weekend. That is 7 long years. The only Mass kept is on the First Friday of the month for all those whose names are on the Altar List of the dead. In other words for those who hand in a sizeable donation in November with the names of their deceased loved ones. At this Parish everything has a price. There was an actual poster on the wall until someone complained stating that the minimum price for a mission mass was €5 they would not accept anything less. That was in addition to the price of the card. The Masses said in the Church itself the minimum acceptable donation is now €10. Does that mean the local Priest is meant to be worth more than his counterpart in a developing country saying mission masses.

All of this goes to prove that the Church and unfortunately some of its clergy are just money grabbing scroungers with not a bit of Christianity in their lives.

There is very little of it in this entire Parish in recent years.