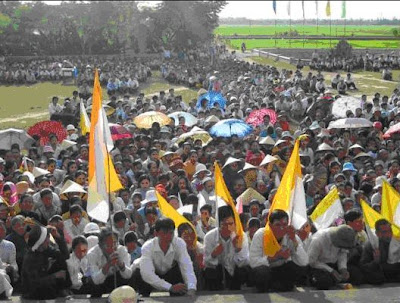 A Catholic from Dong Hoi was arrested yesterday by police and groups of thugs – in the service of law enforcement - shouted death threats against the faithful.

The city of Dong Hoi is located about 500 km south of Hanoi and the Local Government (found in Quang Binh) has declared there are "no Catholics" in the area, even if there are at least three thousand faithful.

Fr. Vo Thanh Tam, secretary of the College of Priests of Vinh Diocese (which belongs to Dong Hoi) confirmed that several Catholics were arrested a few days ago and that yesterday “Mr. Nguyen Cong Ly was arrested. His house is frequently used by the faithful for liturgical services”.

In fact there are no churches in the area, the only one being Tam Toa, which is in ruins and which the government wants to use as a "memorial" to the war against the United States. Other sources say that the area is being used to build a tourist village.

According to witnesses, the police and groups of thugs are roaming the streets and attacking those who visibly wear Catholic religious symbols.

In recent weeks a group of faithful tried to repair the ruins of Tam Toa, but were stopped by police, brutally beaten and arrested. To demand their release impressive demonstrations were held by Catholics in the diocese of Vinh, in Saigon (Ho Chi Minh City), in Hanoi and other cities.

Immediately after the episode in Tam Toa, hundreds of Catholic families fled Dong Hoi to find refuge in Ha Tinh and Nghe An (also in the diocese of Vinh).