Sinners have shamed land of saints and scholars 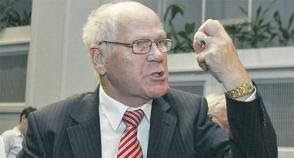 THE world no longer sees Ireland as the land of saints and scholars.

It was a simple summation of the impact of the Ryan report, and it stood out amid the angry outpourings from the victims of clerical abuse yesterday.

Their anger has not diminished since the report shone its light onto the litany of abuse they endured as children.

With quivering lips and breathless hoarseness, the victims yesterday gave the Government another honest and stark appraisal of the terrible wrongs which can never be amended.

Michael O'Brien, whose previous contribution on RTE's 'Questions and Answers' opened the dams of pent-up frustration and anguish, told of the television interviews he has conducted worldwide since that moment of catharsis.

We are no longer the island of saints and scholars in the eyes of the international community, he said. "I had to bare my soul on 'Questions and Answers'. The Taoiseach's office was opened immediately. Everything else is happening immediately. Let it be done and let us get it over with," he told the Children's Minister Barry Andrews in Government Buildings yesterday.

"The ball is in your court, minister. It's up to you to grab that ball. I want you to run with it and make sure that when you get to the goal posts, that you score."

Every speaker who took the microphone was equally emphatic. All had advice for the minister, solutions to the problems, and alternatives to the Government's proposals. Of primary concern to John Kelly, of Irish Survivors of Child Abuse, was the failure of the religious orders to dole out more money in compensation to victims and share the financial burden equally with the State.

"It would appear they are dragging their feet. We feel the Government needs to put more pressure on them to come up with a figure," he said. "There isn't any point in the Taoiseach being in office if he's not in power. He needs to have the power to say to the religious that criminal acts will go before the judicial system."

At times yesterday, however, an impatient friction between the various campaign groups erupted.

Some, such as Paddy Doyle, who wrote 'The God Squad', turned to accusing the others of having "no mandate" to speak on behalf of victims.

"Many people here are setting themselves up as spokespersons but they don't have a mandate...when you're meeting with them, minister, you need to be asking them: 'Who are you? Who are your members? When did you last hold a meeting?" he said.

"There is no such thing as a bad child," he said to applause from fellow campaigners.