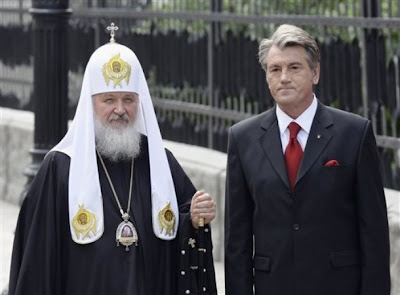 "The great desire of the Ukrainian people is to live in a single national apostolic Church”.

These are the words of President Yuscenko after his meeting with the Patriarch of Moscow Kirill in Kiev yesterday on the first day of the long pastoral visit to Ukraine of the head of the Russian Orthodox Church.

The successor of the Third Rome arrived yesterday in the capital of the country and the program of his trip, which ends August 5, provides for various stops in many cities.

But the first day of the journey tackled one of the central nodes of the visit. In Ukraine there are three Orthodox churches in opposition to one another.

Two of them do not have the approval of Moscow, and maintain the national character of Ukrainian orthodoxy and do not want to concede any jurisdiction to the Russian Patriarchate.

Yuscenko said on the sidelines of his meeting with Kirill that "the goal of our dialogue [with the Patriarchate] is to speak trustingly, openly, and honestly about the things that are sensitive in Ukraine's religious life. We spoke about one of the problems in the Ukrainian church - the current division of the Orthodox Church”.

The President reaffirmed that authorities do not want to interfere on issues that concern the religious sphere, but added that this particular problem has a negative impact on social stability and spiritual unity of the country because it "weakens the power of the Orthodox Church in Ukraine."

For this reason it is desirable that "the great desire of the Ukrainian people to live in a single national apostolic Church” be supported.

Kirill immediately responded to Yuscenko’s statement regarding the need for a single national church independent of Moscow.

Referring to the Ukrainian Church that is recognized and in communion with the Patriarchate of Moscow, Kirill said that "this Church is already in place, Mr. President. It is an independent church in Ukraine, and if it did not exist then even Ukraine would no longer exist”.