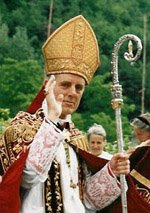 Sweden has refused to summon a journalist for questioning in a possible German prosecution of Richard Williamson, the fundamentalist Catholic clergyman who caused a furor by questioning the scale of the Holocaust.

Prosecutors in the German city of Regensburg admitted Thursday the inquiry was effectively stalled.

Williamson, a British leader of the Society of St Pius X (SSPX), gave an interview last year to a Swedish TV journalist near the German city, where the SSPX, an advocate of old-style Catholicism, has a seminary.

A re-broadcast of the interview this year, just after Pope Benedict XVI ended the excommunication of Williamson and three other SSPX leaders, triggered a storm worldwide.

Regensburg prosecutors opened an inquiry to see if he could be charged with Holocaust denial, which is a crime under German law.

They asked their Swedish counterparts to summon the journalist for questioning. But Sweden replied there was no legal basis to interrogate the journalist as requested.

Prosecutor Guenther Ruckdaeschel said this was apparently because of journalistic privilege in Sweden, although he said, from a German point of view, the argument made no sense.

'Legally, we can't see why. It wouldn't be any problem here to question a journalist,' he said.

'If we don't get anything from Sweden, we'll just have to see how we can get on without this testimony.'

Population studies show that 5 million to 6 million European Jews were killed by all causes,including death camps, starvation, disease and battle, during the Nazi period.

In the interview, Williamson, 69, appeared to question that, contending there was no historical evidence of Nazi gas chambers and claiming 'only 200,000 to 300,000 Jews' had been killed in concentration camps.