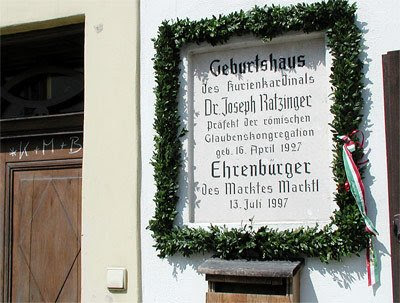 Solar panels are being installed this week on the private home in Germany of Pope Benedict XVI to generate electricity for the German power grid and raise money for a good cause.

Benedict okayed the project on condition that there was no expenditure of church funds.

He owns the house in a suburb of Regensburg and lived there till he began his climb through the church hierarchy.

The power, estimated at 5,800 kilowatt hours per year, will be fed into the German national electricity grid.

The income earned, estimated at 2,500 euros (3,500 dollars) annually, will be donated to a society that offers scholarships and trade training to disadvantaged youths.

The organizers are linked to Comenius, a European Union fund to encourage school partnerships.

A caretaker looks after the 1960s-style house, furniture and garden.

Benedict last dropped into his home in the suburb of Pentling in 2006 while he was paying a papal visit to Germany.

Solar panels have been springing up all over Germany thanks to government subsidies and a minimum buy-in price for power which electricity companies must pay.

Plumbers said the house was good for solar power, but not ideal as its ridge runs north-south with slopes to east and west.