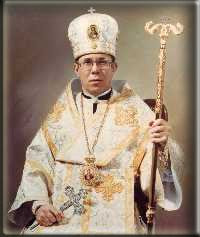 Benedict XVI this morning accepted the resignation of Bishop Robert Mikhail Moskal, Eparch of St. Josaphat in Parma, Ohio and appointed an apostolic administrator to lead the eparchy—the Eastern Catholic equivalent of a diocese—until a new eparch is named.

Bishop John Bura, currently an auxiliary of the Archeparchy of Philadelphia of the Ukrainians was chosen by the Pope to become the new apostolic administrator “sede vacante” of St. Josaphat in Parma.

Born in 1944 in Wegeleben, Germany, Bishop Bura moved to New Jersey with his family in 1950. Nine years later, he entered Saint Basil the Minor Seminary in Stamford, Connecticut and studied there until 1963. He went on to study theology at the Catholic University of America in Washington D.C and then at the St. Josaphat Ukrainian Seminary.

In 1971, he was ordained a priest for the Archeparchy of Philadelphia. After his ordination, he served in various pastoral and administrative ministries, taught religion classes in Ukrainian and served as vice-rector of Saint Basil Seminary in Stamford. He later went on to become the rector of St. Josaphat Ukrainian Catholic Seminary in Washington, D.C. and served as a pastor before being named auxiliary bishop of the Archeparchy of Philadelphia in 2006.