Pope's message for 2010 World Peace Day will focus on environment 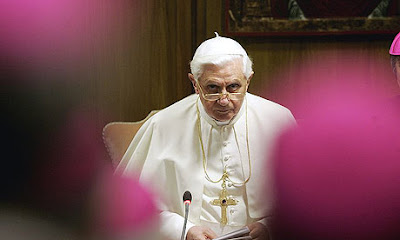 Pope Benedict XVI will focus on the connection between protecting the environment and working for peace in the message he will publish for World Peace Day in 2010, the Vatican said.

The theme the pope has chosen for the Jan. 1 celebration is "If You Want to Cultivate Peace, Safeguard Creation," the Vatican announced July 29.

The Vatican said the pope intends to discuss the fact that in a globalized world there is a strict connection between protecting the environment and promoting peace.

"The use of resources, climate change, the application and use of biotechnologies (and) demographic growth" are all issues that can have repercussions across national borders for generations to come, the statement said.

The papal message will underline the fact that protecting the natural environment is a challenge all people must face together, recognizing they have an obligation to respect a gift God created for all, it said.

Pope Benedict also wants to emphasize how the "current ecological crisis" is impacting the entire world and, therefore, requires international action to resolve, it said.

"If one wants to cultivate the good of peace, in fact, one must promote a renewed awareness of the interdependence that links the earth's inhabitants to one another," the Vatican statement said.

Together people must preserve and restore the natural environment, eliminating at least some of the causes of environmental disasters, it said.

The Vatican statement said Pope Benedict intends his World Peace Day message to be a further development of the four paragraphs on the environment included in his encyclical "Caritas in Veritate" ("Charity in Truth").

In his encyclical, published in early July, Pope Benedict said, "The environment is God's gift to everyone, and in our use of it we have a responsibility toward the poor, toward future generations and toward humanity as a whole."

While the encyclical focused on development, and therefore discussed the need to share natural resources equitably and not exploit those found in poor countries, it also insisted there is a connection between environmental protection and peace.

"The stockpiling of natural resources, which in many cases are found in the poor countries themselves, gives rise to exploitation and frequent conflicts between and within nations. These conflicts are often fought on the soil of those same countries, with a heavy toll of death, destruction and further decay," the encyclical said.