Pope will visit Viterbo, where papal conclaves were born 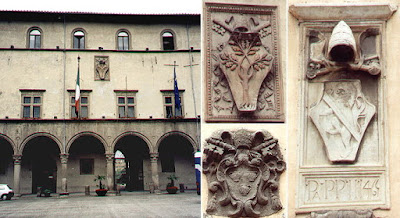 Pope Benedict XVI will interrupt his stay at the papal summer villa to make a one-day trip to the Italian city where the papal conclave was born.

In fact, he will visit the conclave room in the Palace of the Popes in Viterbo Sept. 6 before celebrating an outdoor Mass.

The town is about 65 miles north of Rome.

Until 1271, the gathering of cardinals for the election was not called a conclave -- the word means under lock and key.

After Pope Clement IV died in 1268, the cardinals meeting in Viterbo could not elect his successor.

The election dragged on, ultimately lasting 33 months. It was not until city officials locked all of the cardinals in the meeting room, reduced their diet to bread and water and took the roof off the meeting hall that the cardinals elected Pope Gregory.

It was Pope Gregory who made it church law that papal elections would take place in a conclave.

Pope Benedict will travel to Viterbo by helicopter from the papal summer villa at Castel Gandolfo, south of Rome.

Before returning to Castel Gandolfo, the pope will transfer by helicopter from Viterbo to Bagnoregio, where St. Bonaventure was born in 1217.

Pope Benedict wrote his postdoctoral thesis on the doctrine of revelation in the works of St. Bonaventure, a doctor of the church.

The pope is scheduled to venerate the "holy arm" of the saint, which is kept in Bagnoregio's cathedral.