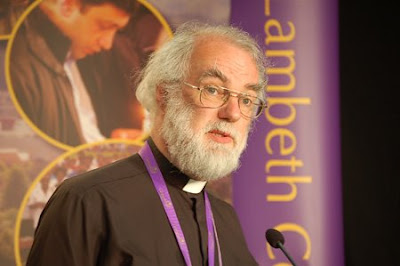 The Archbishop of Canterbury Dr Rowan Williams has issued a lengthy response to the recent move by The Episcopal Church in the US to open its ordination process to all individuals, including practising homosexuals.

Dr Williams, spiritual leader of the Anglican Communion, acknowledged the real possibility of the global body adopting a "two-track" model in which there would be "two styles of being Anglican".

Rather than a full-on schism, Anglicans in the 77 million-member body would try to work together while holding different theological convictions over such issues as homosexuality.

"It helps to be clear about these possible futures, however much we think them less than ideal, and to speak about them not in apocalyptic terms of schism and excommunication but plainly as what they are – two styles of being Anglican, whose mutual relation will certainly need working out but which would not exclude co-operation in mission and service of the kind now shared in the Communion," he wrote.

His reflections come nearly two weeks after The Episcopal Church approved two resolutions opening the ordination process to all baptised members, including practising homosexuals, and calling for the development of liturgical resources for the blessing of same-sex unions.

Episcopal Presiding Bishop Katharine Jefferts Schori has insisted that the resolutions do not repudiate the Church's relationships with other members of the Anglican Communion – who agreed on moratoria on consecrating partnered gays and blessing same-sex unions.

But conservative Anglican leaders say the actions of The Episcopal Church – the US branch of Anglicanism – mark a clear break with the rest of the Communion.

While some conservatives argue that schism has already occurred within the third largest global Christian denomination, Dr Williams has continued to try and hold the global body together, particularly since 2003 when The Episcopal Church consecrated its first openly gay bishop.

He recognised that the US body's latest resolutions have again caused anxieties and conceded that the repeated request for moratoria "has clearly not found universal favour".

Anglicans have so far maintained a unified structure while containing diverse convictions, he said. But the present structures may need serious rethinking, he indicated.

Restructuring does not mean the end of the Anglican way, Dr Williams emphasised: "But the different needs and priorities identified by different parts of our family, and in the long run the different emphases in what we want to say theologically about the Church itself, are bound to have consequences."

He noted in his statement that any major changes, particularly in regards to views on homosexuality, require a strong level of consensus within the Anglican Communion and solid theological grounding considering the way "the Church has consistently read the Bible for the last 2,000 years".

Currently, the Communion has not agreed to any changes and most parts, particularly in the Global South, reject homosexual practice as incompatible with Scripture.

"To accept without challenge the priority of local and pastoral factors in the case either of sexuality or of sacramental practice would be to abandon the possibility of a global consensus among the Anglican churches ... It would be to re-conceive the Anglican Communion as essentially a loose federation of local bodies with a cultural history in common, rather than a theologically coherent 'community of Christian communities,'" Dr Williams said.

Earlier this year, Dr Williams mentioned the possibility of the Anglican Communion turning into a federation considering the high levels of diversity. But he and other Anglican leaders are hoping to avoid that path with an Anglican Covenant – a document seeking to uphold the autonomy of the Communion’s 38 provinces while asking for their voluntary commitment to a process of joined-up deliberation to solve disputes over contentious issues.

The covenant, he explained, seeks "structures that will express the need for mutual recognisability, mutual consultation and some shared processes of decision-making." It is about mutual reasonability rather than centralisation, he stressed.

But taking into account those who may not sign on to the covenant, Dr Williams sees the "two-track" model as a possible future for Anglicans.

"It should not need to be said that a competitive hostility between the two would be one of the worst possible outcomes, and needs to be clearly repudiated," he said.

"The ideal is that both 'tracks' should be able to pursue what they believe God is calling them to be as Church, with greater integrity and consistency. It is right to hope for and work for the best kinds of shared networks and institutions of common interest that could be maintained as between different visions of the Anglican heritage."
+++++++++++++++++++++++++++++++++++++++++++++
Disclaimer