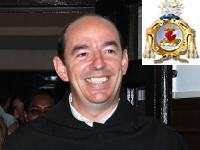 A new prior provincial of the Augustinian Recollects is describing the challenges his order faces in reaching out to China, drawing new vocations, and educating them well.

Father Francisco Javier Jimenez was elected prior of the Province of St. Nicholas of Tolentine, a press release on the order's Web site reported this week.

The priest worked in schools and parishes in Spain, as well as missions in Brazil, and served for many years as a formator for young religious.

In an interview, the new prior outlined several needs that he wants to focus on in his province, which extends throughout nine countries on three continents.

Among these, the priest said, are the need to "continue praying and working for vocations" and to "persevere in the effort on continuous formation."

One of the greatest challenges of the province, he noted, is working in China.

The country is "open to hope," Father Jimenez said, and vocations continue to arise from there.

As well, he added, "the greater contact and relationship that we have with them, the greater freedom" the people are feeling.

We will have to "begin to prepare some religious in the Chinese language," he noted, "so that the future will not catch us empty-handed."

The prior explained that his province is also giving increased attention to ministry with migrants.

He continued: "It is one of the new poverties, where religious life has to be present. Our province cannot afford to be isolated or be indifferent in the face of this demanding reality.

"We want to attend it because God walks and lives among the poor."

In the recent provincial chapter that elected him, the prior reported, it was decided that they would contribute 0.7% of the order's income to the poor.

This aims to "highlight our commitment" and "option" for them, he added.

Father Jimenez affirmed that his religious communities face the same challenges as all other religious: "how to give today a valid, attractive, clear, courageous and determined witness of the following of Jesus."

He stated that "Spain has ceased to be a fertile ground" for vocations, and "obliges us to see the bigger picture in the medium and long term."

The priest affirmed that they will be looking at the Augustinian Recollect formation program, to arrive at an agreement on the type of religious "we want to and need to form," and what educational experiences and locations are favorable to this.

Father Jimenez stated that sometimes the young people in discernment of the vocation are "burdened with the problems of today's youth: marked individualism, search for personal fulfillment over and above a shared and communitarian project, strong nationalistic tendencies that hamper the universality required in our communities and in our province."

However, he added, "they also have many qualities, personal virtues, a sincere desire to consecrate themselves to God in our family, a sincere affection for our religious, missionary and pastoral concerns."

"The art of formation consists in gradually and patiently decreasing the former and strengthening the latter," the prior explained.

Part of this formation, he said, is opening up to working more in collaboration with lay people.

"I believe now is the time to take the step forward," the priest affirmed. "We cannot afford or want to delay more."

"We want to add, multiply, share with the lay our spirit and our mission," he said.