Heavy Road for Hungarian Cardinal Tipped as Next Pope 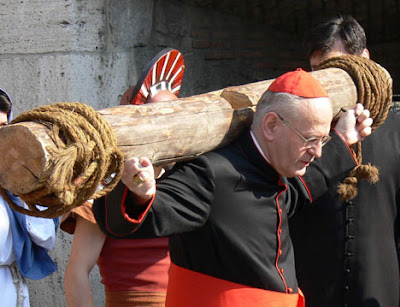 Everyone is all excited about the news that some American magazine called Newsweek thinks Hungarian Cardinal Péter Erdő may be in line to succeed Pope Benedict XIV if the latter's recent wrist injury somehow kills him.

While the piece in question says Erdő's chances of being upgraded from "His Eminence" to "His Holiness" are buttressed by his reputation as a scholar who has authored hundred of research papers and articles, and well as the respected president of Europe's Catholic bishops, it points out that his weak English skills might be a problem. We can think of a couple more!

For one thing, many Catholics seem to believe that the time has finally come for the guy in the impeccable white robes running the Church to be non-white, to better reflect the, er, glorious mosaic of racial and geographic diversity the church now represents.