The Sacrament of Penance: merciful justice 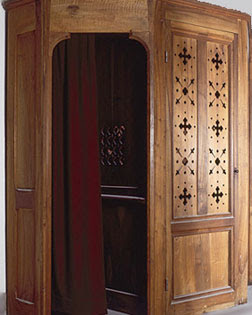 In order to make way for the heretical changes that were to take place, it was necessary to deeply impress upon Catholics the “I’m okay, you’re okay” mentality. This has led to the overall focus on God’s mercy and near disbelief in hell or a just God.

Sedevacantists are criticized for their purported “doom and gloom” mentality. These judgments usually come from those who are quite comfortable being “cafeteria-style Catholics”—those who choose which Commandments to follow and which to ignore. This thought pattern is what has led to the increase in divorce, immorality, immodesty and sexual deviance.

I was one of those Catholics. Nearly twenty years ago—after having had no spiritual support system for thirty years—I filed for divorce from my twenty-year marriage and easily received an “annulment” from the Novus Ordo Church. I immediately began “dating.” I look back with horror—not only at my behavior—but at the realization that I never once thought about sin. It never occurred to me that I was offending God. After being raised in the pre-Vatican II church, how had I completely lost my way?

I was very fortunate, one day, to find a priest who was not afraid to be “politically incorrect” or hurt my feelings. He cared more for my soul than his own popularity. The day that I sat down in his office, I said to him, “So, I’m divorced. How does that work?” He prudently replied, “You are not divorced.”

My life literally flashed in front of me as I drove home that day. Suddenly I could see all the things I had done—the Commandments I had broken—out of sheer ignorance. I could not get Our Blessed Mother out of my mind. She is the model after whom all women should pattern themselves; what did she think of me?

It was that day in my life that I realized, “I’m not okay.” I have been offending God and seriously jeopardizing my soul. The question was, “What was I going to do about it?” I had to make a choice between my own pleasure and the Son of God who died for me.

The road since then has been rocky, the learning curve, painful. I have had to re-learn about humility and self-abandonment, often left with a putrid taste in my mouth. But I have also found peace and become strong. The blindness that shadowed my life—the excuses and rationalizations that once held me in bondage—are gone.

Yes, God is merciful. However, Vatican II has put all emphasis on that mercy and thrown out the baby with the bath water. St. Catherine of Siena was a mystic who lived in Italy in the 14th century. She began receiving inner locutions from God the Father at a very early age. These “discussions” were recorded by her and later translated into what is known as The Dialogue of Catherine of Siena. This is what God had to say to her about His mercy:

…They will say, “Why should you want to wear yourself out? Enjoy this life; you can admit your faults at the end and obtain mercy.” In this way the devil makes them lose the fear that had enabled them to begin.

For these and all sorts of other reasons they turn back and are not constant or persevering. All this happens to them because the root of selfishness has never been dug out of them. This is why they do not persevere. Rather, they accept my mercy and hope not as they ought, but foolishly and with great presumption. And presumptuous as they are, they put their trust in my mercy even while they are continually abusing it.

I have not given, nor do I give my mercy for people to abuse, but that they may use it to defend themselves against the devil’s malice and inordinate spiritual confusion. But they do precisely the opposite: They use my mercy as a weapon against me. And this happens to them because they fail to act on their first change of heart, when they were roused by fear of punishment and hurting from the thorns of so many troubles, from the wretchedness of deadly sin. So because they fail to change, they never attain love for virtue, and therefore they do not persevere (1980) Catherine of Siena, The Dialogue (S. Noffke, O.P., Trans). New York: Paulist Press, pp.101-2.

In Article 15 of his Apostolic Exhortation on Reconciliation and Penance, John Paul II says, “Wounded in this way, man almost inevitably causes damage to the fabric of his relationship with others and with the created world.” Sin is no longer personal (between the person and God) but has become social (against society).

George M. Regan discusses the changes in morality in his book New Trends in Moral Theology. On page 14, he addresses “love.”

“Anything may be done, it would seem provided a man is careful that he does it out of true and unselfish love…Accordingly, proponents of this system would have us believe that a person, in certain circumstances, may even commit adultery or rape, have premarital sex, or publicly disown God provided he has the right intention. This “law of love” can even justify murder. For example, I can put to death a person in intense pain if I do it out of love, much as I would shoot a horse because I cannot stand to see it suffer!”

Vatican II, in an effort to “blend in” with the separated brethren, has taken all focus off the suffering of Christ for our sins. The Novus Order Church has become one of “celebration” rather than repentance. There is certainly joy and hope in the Resurrection and it is not something that should be forgotten. However, the guiding force for our salvation is a love for Almighty God and the desire to never offend Him. Humility is the key in this struggle, recognizing that we cannot persevere without the Sacraments—particularly the Eucharist and the Sacrament that absolves us of our sins: Penance. Our strength does not come from man or the “community.” It comes from God.
+++++++++++++++++++++++++++++++++++++++++++++
Disclaimer

Thinking theology outside the box -