There is no contradiction between faith and works, Pope asserts 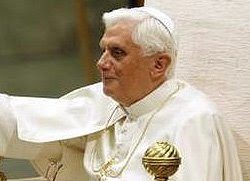 Pope Benedict continued his reflections on St. Paul today, urging the 9,000 people present to consider Paul's teaching on faith and works in the process of justification.

Emphasizing that works do not justify a person, the Pope said that works necessarily flow from love for Christ.

In his catechesis on St. Paul’s teaching on justification, the Pontiff stated that man is unable to justify himself by his works, but becomes just before God only because God restores us to right relationship by uniting us with Christ.

He continued, "Man obtains this union with Christ by means of faith." This faith, if it is true and real, becomes love and expresses itself in charity; without charity faith would be dead.

Pope Benedict then noted that there has been confusion concerning the relevance of man's actions for salvation.

According to the Pope, the interpretive key can be found in St. Paul's Letter to the Galatians, which emphasizes the gratuitousness of justification apart from man's works and highlights the relationship between faith and charity and faith and works.

The fruit of the Holy Spirit "is love, joy, peace, patience, kindness, generosity, faithfulness, gentleness, self-control," the Holy Father quoted, pointing out that at the beginning of Paul's list of virtues is love and at the conclusion self-control.

Referencing both Galatians and Corinthians, Benedict XVI taught that true faith in Christ is what justifies men, but also that that same faith, if it is genuine, “leads him to live no longer for himself, but for Christ; it makes man a new creation and a member of Christ's Body, the Church.”

"The centrality of justification without works, the main object of Paul's preaching, presents no contradiction to faith working through love; on the contrary it requires that our own faith be expressed in a life in accordance with the Spirit," Benedict XVI added.

The supposed contradiction between faith and works that was first raised by Luther is an "unfounded conflict," he remarked.

Although some people see a conflict between what Saint Paul teaches and what Saint James teaches, the Pope explained that "For both Paul and James, faith working through love bears witness to the free gift of justification in Christ."

The Holy Father noted that men often fall into misunderstandings that characterized the community of Corinth: "Those Christians thought that having been gratuitously justified in Christ by faith, 'all things are lawful for them."

"What we must do," he went on, "is gain a renewed awareness that, because we have been justified in Christ, we are no longer our own but have become temples of the Spirit and hence are called to glorify God in our bodies. We would undervalue the priceless value of justification, bought at a high price by the blood of Christ, if we did not glorify it with our body, with all our lives." For this reason, St. Paul exhorts the Roman "to offer your bodies as a living sacrifice, holy and pleasing to God, your spiritual worship," he said.

The ethics that Paul proposes to believers retain their importance today because "they are rooted in the individual and community relationship with Christ."

The essential point is that Christian ethics do not arise from a system of commandments," Benedict XVI indicated, "they are a consequence of our friendship with Christ.