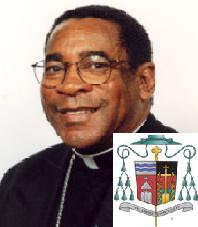 When Pope Benedict XVI tapped the archbishop of St. Louis to be one of the highest-ranking Americans working in the Vatican, it left a gaping vacancy.

But whispers through the blogosphere and from Vatican watchers are saying Memphis Bishop J. Terry Steib is on the short list to fill the opening.

A low-key figure, Steib, 68, who has been bishop in Memphis for 16 years, has earned recognition for having one of the largest groups of men entering the priesthood in the country.

While in law school, Martin was appointed for one month to work inside the Vatican for Pope John Paul II. He also served as a legal aide for the Synod of Bishops and later as Archdiocesan cabinet director for the St. Louis Human Rights Office.

Before coming to Memphis, Steib was auxiliary bishop for the archdiocese of St. Louis for nearly a decade.

"He was just revered by everyone," said Martin, who added that many Catholics in the Gateway City would like to see him back.

If chosen to lead, Steib would be St. Louis' first black archbishop.

Raymond L. Burke was appointed in June to the office of Prefect of the Supreme Tribunal of the Apostolic Signatura after four years as archbishop in St. Louis.

Based on similar vacancies, it could take several months to a year to fill the opening.

Top candidates to be the ninth Archbishop of St. Louis will be compiled by Pietro Sambi, known as the Apostolic Nuncio, who is a representative of the Holy See in the U.S, said Martin.

That list would then be whittled down by top Vatican officials and eventually handed off to the Pope for a final decision.

But Steib says the assumption he will be tapped to be archbishop is only a rumor.

"Should the Holy Father think I should go somewhere else I would obviously consider that carefully. But no one has approached me and I don't expect anyone to be in touch with me," he said in a written statement.

The St. Louis Archdiocese comprises more than 500,000 Catholics, compared with the 73,000 Catholics in the Memphis diocese.

Father John Geaney, spokesman for the Memphis diocese, wouldn't comment on who would temporarily fill Steib's shoes if he were whisked away.