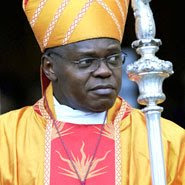 The Archbishop of York hit out on Thursday at the Government’s tough stance on asylum seekers, saying it should instead show more mercy and compassion.

Speaking at the Evangelical Alliance’s annual Temple Address in London, Dr John Sentamu dismissed the recent assertion from Immigration Minister Phil Woolas that charities and lawyers supporting asylum seekers undermine the system and “do more harm than good” in launching numerous appeals to win their right to stay.

He also rejected the controversial minister’s comments, made in a recent interview with the Guardian, that one asylum seeker given permission to stay by an appeals court had “no right to be in this country”.

“For any honourable member to suggest that someone who has made out reasonable grounds, and has succeeded in their appeal under the due process of law ‘has no right to be in this country’ is a worrying development,” he told the audience, made up largely of church leaders and representatives of Christian groups.

Dr Sentamu said the crisis in Zimbabwe only heightened the need for the UK to demonstrate mercy.

“At a time when torture and inhuman treatment continues to be meted out to the people of Zimbabwe by a brutal government that treats its citizens as stepping stones to political power, the need for mercy within our country’s law is an imperative. We must show a better way,” he said.

The Archbishop further stated that asylum seekers should be allowed to work during the lengthy application process. Current law makes it illegal for asylum seekers to work whilst their applications are being considered, meaning many are destitute or forced to rely on help from churches and charities.

“It is an appalling situation that has continued for far too long for a very large number of them. The quality of our mercy in this area as a society has been shown to be lacking,” said Dr Sentamu.

He criticised the hard line approach of some politicians towards immigration, citing the example of one 39-year-old Ama Sumani, who was deported back to her native Ghana in January with a life-threatening illness despite appeals to remain in the UK on compassionate grounds. Unable to afford medical treatment in Ghana, she died two months after her return to the country.

“It is the tough talking of the unmerciful who would come down hard on criminals, immigrants and troublemakers whose voices seem to compete for votes in the public square in the belief that this is the way to win hearts and minds.”

Instead, people have a duty to act compassionately to their neighbours and choose “social fellowship”, interdependence and service over individualism, he insisted.

“For me the road to recovery is a path not to riches but to service. It is rooted in the rediscovery of a vision to rebuild community in recognition of our duties to one another. Of standing ready to help our neighbour not only because they may be a victim of the recession, but because they are created in the likeness of God, and are an individual of infinite worth for who Christ died,” he said.

Dr Sentamu said that the financial crisis offered the nation the opportunity “to create a renewed shared vision of community based on service rather than caring for number one, on covenant rather than contract, on duty rather than entitlement”.

Mr Woolas rejected the Archbishop's criticism, telling BBC Radio 4's Today programme, "I don't accept the central charge that being tough is being immoral. I would argue the opposite.