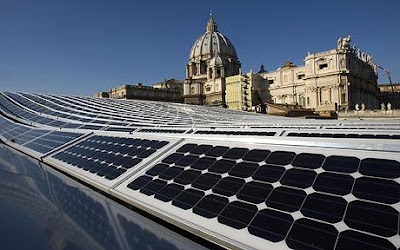 The Vatican won the 2008 Euro Solar Prize for turning the football field-sized roof of its Paul VI audience hall into a giant solar-power generator.

A European association promoting renewable energy presented the award to Cardinal Giovanni Lajolo, president of the commission governing Vatican territory, during the inauguration of the new roof on November 26.

Cardinal Lajolo said he would make sure the award, a small silver and glass globe, would go to Pope Benedict XVI, who repeatedly has called on humanity to show greater care for creation.

The association's president, Hermann Scheer, said he hoped more governments, businesses and individuals would be inspired by the Vatican's efforts and thereby promote and support renewable energy, too.

A German company, SolarWorld, donated and installed 2,400 solar panels on the top of the Vatican's audience hall after Vatican officials had made public their plans to convert the rooftop into a solar-power generator. The gift is estimated to be worth about £1 million.

Scheer said the only way to inspire more people to tap into solar power was for a well-respected, "worldwide institution, indeed, the Catholic Church with its global importance", to set the stage and show it could be done.

He said he hopes the Vatican's new solar-panel roof, which will produce some 300,000 kilowatt-hours of power each year, will help "overcome the mental block many people have toward new sources of energy".

The solar panels began generation energy for the Vatican's power grid on November 26 during the Pope's weekly general audience.

A large electronic tally board hangs in the hall to keep count of how many kilowatt hours are being produced and how much oil and carbon dioxide is being saved by using solar energy.

After just a few hours on a partly sunny day, 60 kilowatt-hours had been generated and 88lb of carbon dioxide emissions, or CO2, were avoided.

Pier Carlo Cuscianna, director of technical services for Vatican City, said another solar-panel system was being installed above the Vatican's employee cafeteria to help provide power for heating and cooling the building.

Another project still in the planning stages is to set up 1.2 acres of solar panels at Vatican Radio's Santa Maria di Galeria transmission centre in the countryside outside Rome.