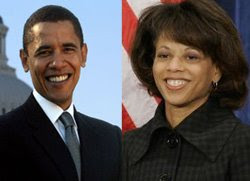 President-elect Obama has selected as Director of the Domestic Policy Council Melody C. Barnes, a New York lawyer with an “unyielding” record of abortion rights advocacy.

It also oversees the Office of Faith-Based and Community Initiatives.

Barnes is a former Executive Vice President for Policy at the Center for American Progress, where she led the left-wing think tank’s Faith and Progressive Policy Initiative.

She has also served as a board member of EMILY’s List, a group formed more than two decades ago to support pro-abortion rights women candidates. Over the years the group has raised millions for Democratic women candidates who support unrestricted access to taxpayer-funded abortion on demand.

EMILY’s List has even cut funding from pro-abortion rights politicians who voted to ban partial-birth abortion.

Barnes has also lobbied on behalf of the Center for Reproductive Rights (CRR).

Carlos Polo, director for Latin America at the Population Research Institute, has linked the Center for Reproductive Rights to a strategy to force permissive abortion laws upon Latin America.

Members of CRR have proposed using international litigation to “develop new standards for the protection of reproductive rights” and to force local authorities to ignore their country’s laws and introduce changes that would allow abortion and “reproductive health” services for teenagers.

Barnes was a former aide to Sen. Ted Kennedy and was his chief counsel at the Senate Judiciary Committee from December 1995 to March 2003. According to the New York Times, Barnes is associated with a “bitter dispute” over confirmation of a federal appeals court judge in 2002. At the time, charges were leveled against Barnes and another aide to Ted Kennedy that they tried to influence the outcome of a high-profile affirmative action case by delaying the confirmation of a judge who might have ruled against affirmative action.

Bill Donohue, president of the Catholic League for Religious and Civil Rights, in a Monday statement voiced criticism of Barnes’ selection as head of the Domestic Policy Council.

Claiming her “forte” is working with the “religious left,” Donohue reported that Barnes has been described by the left-wing journal The Nation as a “dyed-in-the-wool progressive.”

“She wants to overturn all restrictions on embryonic stem cell research, and her passion for abortion rights is so unyielding that she has served on the board of EMILY’s List and the Planned Parenthood Action Fund,” he charged.

It appears that Obama is going to go easy on economic and military changes, which will free up resources and build urgency for his social agenda. In other words, a harsh pro-abortion, anti-family regime will be the prize purchased by moderation in economic and foreign policy. It will also be his ransom to the Hard Left.

The genius of all this is the fragility of the alliance between economic and social conservatives.