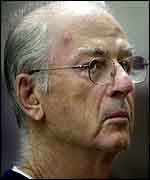 A defrocked Roman Catholic priest at the center of the Boston clergy sex abuse scandal, who was assigned to St. Francis of Assisi Church in Braintree in the late 1960s, has lost his bid for a new trial.

Paul Shanley, 77, who is serving a 12-to-15 year sentence for repeatedly fondling and raping a boy at St. Jean’s Catholic Church in Newton in the early 1980s, sought another trial based on a challenge to the theory of repressed memories.

The victim, a member of the parish’s CCD class when Shanley was assigned there, said that Shanley carried out the assaults, starting when he was six, in the bathroom, the rectory, the pews, and the confessional, and his repressed memories of what happened surfaced in 2002 when the media began reporting about the abuse scandal.

After deliberating for 14 hours, a jury found Shanley guilty on Feb. 7, 2005 of two counts of child rape and two counts of indecent assault and battery on a child.

During a May 29 hearing in Suffolk Superior Court about Shanley’s motion for a new trial, Robert Shaw, Jr., his new lawyer, argued that the theory of repressed memories was “junk science.”

Shaw said that Shanley’s attorney failed to challenge the theory vigorously during his trial.

Assistant District Attorney Loretta Lillios said that Shanley’s defense did call an expert witness during the trial who questioned the reliability of repressed memories and cross-examined the state’s expert on the theory.

Boston attorney Mitchell Garabedian, who represented more than 100 clergy abuse victims who reached civil settlements with the Archdiocese of Boston, was flooded with calls about Shanley’s motion and said that these victims desperately wanted closure.