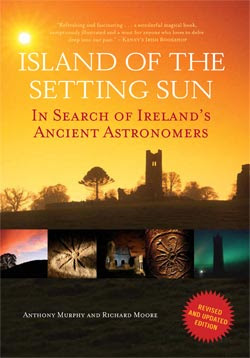 A new book claims St Patrick used an ancient cosmological alignment in deciding the significant locations he picked on his mission across Ireland.

Island of the Setting Sun: In Search of Ireland's Ancient Astronomers posits the theory that saint was using a 300-year old 'equinox journey' to pick the sites which were to become associated with him.

Author Anton McNulty, who has researched ancient astrology in Ireland, believes that most of the major sites identified with the saint's mission in Ireland are part of an alignment stretching 135 miles from east to west across the country.

This path links the Hill of Slane in the east to Croagh Patrick in the west and passes through several other significant places in between.

When the saint first came to Ireland he landed at the Boyne Estuary and went to Slane where he lit the Paschal Fire. Mr McNulty says that in doing so, he was following an 'equinox journey' because Slane and Drogheda - where he landed - are both aligned on the equinoxes.

"The Millmount mound in Drogheda is said locally to be as old as Newgrange and overlooks the estuary where Patrick landed," he explained.

The author said that in researching the book, he used 'Google Earth' to examine ancient alignments and found that the equinox line from Slane extends the whole way west as far as Croagh Patrick.

Locations on the path between them include the Tóchar Phádraig route from Ballintubber Abbey to Croagh Patrick and the Cruacháan Ai complex in Co Roscommon, one of the largest archaeological sites in Europe.

The Slane-Croagh Patrick alignment follows an ancient road which today is known as Tóchar Phádraig , which pilgrims to this day use to go from Ballintubber Abbey to Croagh Patrick.

"In essence, Patrick seems to have followed this sacred equinox journey all the way from east to west" said Mr McNulty.

"Millmount mound, Slane motte and the peak of Croagh Patrick are all in perfect alignment, with astonishing precision".

"The alignment stretches across 135 miles from the Irish Sea to Clew Bay and is accurate to within a couple of feet".