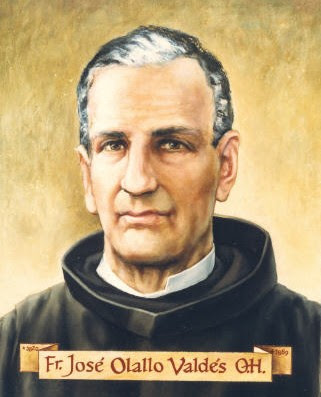 The Roman Catholic Church is set to hold its first beatification ceremony on Cuban soil this weekend, honoring a humble 19th-century monk who helped the sick during an 1835 cholera epidemic.

Jose Olallo Valdes, of the Hospitaller Order of St. John of God, is credited with performing a miracle in 1999 when a 3-year-old girl suddenly recovered from an abdominal tumor doctors said was inoperable.

Cardinal Jose Saraiva, prefect for the Congregation for the Causes of Saints, is traveling from the Vatican to perform the beatification ceremony in the Plaza of Our Lady of Charity in Camaguey on Saturday.

Beatification, according to Roman Catholic doctrine, is the last step before canonization, when a person is officially recognized as a saint.

Olallo is the second Catholic of Cuban origin to be beatified. Augustinian deacon Jose Lopez Piteira, who was born in Cuba, but worked in Spain, was beatified in Rome last year.

Camaguey has been preparing for the celebration of Olallo's beatification for weeks. Residents helped ready the plaza where the ceremony will take place. Thousands of images of Olallo have been distributed and many adorn the doors of homes around the city.

"This for us is an enormous honor, not only for Catholics, but for all Cubans," said Monsignor Juan de Dios Hernandez Ruiz, the island's auxiliary bishop.

Born in Havana on Feb. 12, 1820, Olallo was abandoned in a Havana orphanage, but from a young age showed a desire to serve the needy and especially the ailing.

"He was a great healer who worked as a surgeon, doctor, pharmacist and educator of poor children," recounted the Rev. Felix Lizaso, who headed up the petition for Olallo to be canonized at the request of the former bishop of Camaguey, Alfredo Rodriguez.

"He was known by the people as 'the father of the poor and apostle of charity,"' Lizaso explained.

Pope Benedict XVI issued a statement saying he hopes Olallo's virtuous example will "help the Church in its evangelizing mission, and give renewed apostolic vitality to all Cubans who are glorified as disciples and missionaries of Jesus Christ."

The pope further stated that he trusted the Cuban people to the "celestial protection" of Olallo, "especially the sick and health-care workers."

The pope certified the miracle attributed to Olallo earlier this year. In that case, the family of 3-year-old Daniela Cabrera testified that the child's tumor was cured after they prayed to Olallo for intervention.

According to the beatification documents, the doctors from the hospital in Camaguey confirmed that the tumor had disappeared from sonograms and there seemed to be no damage to the organs that had been affected.

"The whole Church celebrates joyfully this event of Brother Olallo, an abandoned child that never knew his parents, rises to the altar and is proclaimed 'Blessed,"' stated Monsignor Augustin Roman, who documented the testimony of the faithful, regarding the life of Olallo in a work titled, "The habit does not make the monk."

"His story was written in the heart of the people," Roman said.