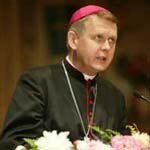 Kazakh human rights defenders and Lutheran, Hare Krishna, Baptist and Ahmadi Muslim representatives have expressed their fear if the legislation.

"We expect persecution in the future because of this very harsh Law," said Baptist Pastor Yaroslav Senyushkevich, "not just on us but on others too. It will be like under Stalin."

Archbishop Tomasz Peta, who leads the Catholic diocese in Astana, said: "We hope that the President- who will have the last word on this - won't allow Kazakhstan after 17 years to return to the path of restrictions on religious freedom.”

The new law must be passed by the upper house and signed into law by the president. Missionary activities would then be curtailed and fines for unregistered religious organizations sharply increased. The amendments also would restrict the right to publish religious literature to approved organizations.

Children would have to provide written authorization from their parents to attend religious events. Noncompliance will be punishable by a fine equivalent to 50 times the minimum monthly salary.

Ambassador Janez Lenarcic of the Organisation for Security and Co-operation in Europe (OSCE) said: “It is disappointing that the law was adopted in such a hasty way without making full use of broad consultations with civil society and expertise from the international community.” He hopes President Nursultan Nazarbaev “will use his constitutional power to allow for a more transparent and inclusive law-making process that would lead to the adoption of legislation fully reflecting OSCE commitments and other international standards”.