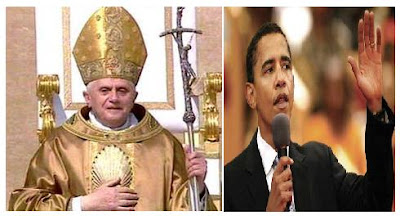 In the 24 years since the U.S. and the Holy See established full diplomatic ties, relations have never been closer or warmer than during the administration of President George W. Bush.

The two sides broke over the U.S.-led invasion of Iraq in 2003, but Bush's personal esteem for Popes John Paul II and Benedict XVI and his agreement with Catholic teaching on such controversial issues as abortion, embryonic stem cell research and same-sex marriage, have fostered a special rapport.

Bush has met a total of six times with the leader of the Catholic Church, more often than any other American president.

That relationship is bound to change in January with the inauguration of President-elect Barack Obama, whose support for abortion rights and embryonic stem cell research has drawn denunciations from a number of church leaders. Yet informed observers agree that both the Vatican and the White House have strong incentives and opportunities to avoid conflict and build on the recent history of collaboration.

Relations got off to a cordial start the day after the Nov. 4 election, when Benedict sent a telegram to Obama, noting the "historic" nature of his victory and assuring him of his prayers that God would "sustain you and the beloved American people in your efforts ... to build a world of peace, solidarity and justice."

Obama, in turn, called the pope a week later to thank him for the telegram, although both sides declined to describe their conversation.

From the American hierarchy, however, congratulations have been mixed with criticism. Cardinal Francis George, of Chicago, president of the U.S. Conference of Catholic Bishops, said the church should "rejoice" in the election of the country's first African-American president but insisted that it would confront Obama over abortion and stem cell research.

Even stronger were the words of Cardinal James Francis Stafford, former archbishop of Denver, who said Obama's statements on abortion reflect "an agenda and vision that are aggressive, disruptive and apocalyptic." (Stafford, who as head of a Vatican court is one of the highest ranking Americans at the Holy See, noted that he spoke only on his own behalf.)

The contrast in tone between American bishops and the Vatican reflects a deliberate "division of labor," said Massimo Franco, author of a forthcoming history of U.S.-Vatican relations, "Parallel Empires." In that way, Franco said, the Holy See can remain "above the fray" while local Catholic leaders apply public pressure to the incoming president.

Of most urgent concern to the church is clearly the Freedom of Choice Act, a proposed bill that would overturn a host of restrictions on abortion. Critics say FOCA would eliminate so-called conscience exemptions for publicly funded health-care facilities, thus forcing Catholic hospitals to provide abortions or shut their doors.

In an oft-cited speech to Planned Parenthood in 2007, Obama vowed to sign FOCA as "the first thing I'd do as president."

Yet Obama's Catholic supporters cite his promises to find "common ground" with abortion opponents as reason to expect moderation.

"FOCA is not in the Democratic platform, and in the third debate he said that he favored restrictions on late-term abortions, which is contrary to FOCA," said Nicholas P. Cafardi, a member of Obama's National Catholic Advisory Board and an opponent of legalized abortion.

Another potential irritant in U.S.-Vatican relations emerged on Monday, when a federal appeals court ruled that a lawsuit over alleged sex abuse by Catholic priests could proceed against the Holy See, despite its status as a sovereign state.

Despite such problems, the Vatican will seek to work closely with the new administration in a number of areas, Franco said. Foremost on its agenda is the fate of Christian minorities in the Middle East -- particularly in Iraq, where their status has grown increasingly precarious during the Bush administration.

Christians in Muslim lands are of strategic interest to the United States as social and cultural intermediaries and "buffers," reducing geopolitical tensions in the region, Franco said.

The new president's priorities for relations for the Vatican are not yet clear, but Cafardi is sure that he will value the relationship.