Cardinal: The Biblical Condemnation of Homosexuality 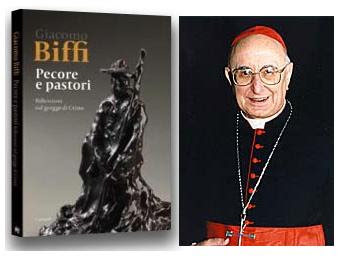 Italian Cardinal Giacomo Biffi, the former Archbishop of Bologna who last year was selected by Pope Benedict XVI to preach the papal Lenten retreat, has authored a new book in which he addresses, among other things, the question of homosexuality.

In 'Sheep and Shepherds', Cardinal Biffi notes that the Biblical condemnation of homosexuality is explicit and Christians are not "allowed, if we want to be faithful to the word of God, the pusillanimity of passing over it in silence out of concern of appearing 'politically incorrect.'"

The Cardinal's book is replete with references to the Sacred Scriptures, with which he makes his case that the societal acceptance of and spread of homosexuality is both "the proof and the result of the exclusion of God from collective attention and social life, and of the refusal to give him due praise."

In a chapter on The Challenge of Chastity, Cardinal Biffi writes:

"The exclusion of the Creator leads to the complete derailment of reason:

"'They became vain in their reasoning, and their senseless minds were darkened. While claiming to be wise, they became fools' (Romans 1:21-22).

"As a result of this intellectual blindness, both theory and behavior have fallen into complete dissoluteness:

"'Therefore, God handed them over to impurity through the lusts of their hearts for the mutual degradation of their bodies' (Romans 1:24)

"And in order to prevent any misunderstanding or any convenient interpretation, the Apostle continues with a striking analysis, formulated in perfectly explicit terms:

"'Therefore, God handed them over to degrading passions. Their females exchanged natural relations for unnatural, and the males likewise gave up natural relations with females and burned with lust for one another. Males did shameful things with males and thus received in their own persons the due penalty for their perversity. And since they did not see fit to acknowledge God, God handed them over to their undiscerning mind to do what is improper' (Romans 1:26-28).

"In fact, Saint Paul is careful to observe that extreme abjection occurs when 'they not only do them but give approval to those who practice them' (Romans 1:32)."

The Cardinal acknowledges the modern day pressures on Christians to remain silent on the subject; however, he notes that these quotes are "a page of the inspired Book that no human authority can force us to censor."

Rather than be silent, Cardinal Biffi says, "We must instead point out the singular relevance of this teaching of divine Revelation: what St. Paul identified in the culture of the Greco-Roman world prophetically demonstrates its correspondence with what has taken place in Western culture in recent centuries: the exclusion of the Creator - to the point of proclaiming grotesquely that 'God is dead' - has had the consequence, almost as an inevitable punishment, of the spread of an aberrant sexual ideology, with an arrogance unknown to previous times."
+++++++++++++++++++++++++++++++++++++++++++++++++++
Disclaimer