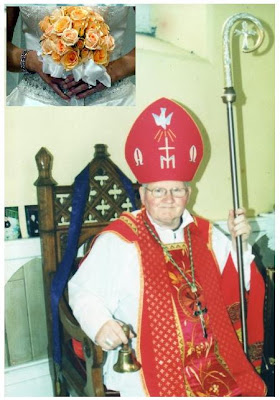 REBEL bishop Michael Cox has made a teenage bride's dream come true by letting her marry two years earlier than the church allows.

The colourful clergyman helped Traveller Shelly McDonagh (16) and her Polish groom Gregory Gorski (21) tie the knot at a ceremony in Co Offaly.

Shelly and Gregory say it was "love at first sight" when they met, and had been going out for a year before the wedding.

But they were not allowed get married in a Catholic church because of Shelly's young age.

Preferring not to wait another two years, they turned to the breakaway Tridentine bishop to grant their wish.

Their wedding featured in a photo spread in the new issue of Voice of the Traveller magazine.

Shelly explained how she met Gregory in the village of Killimore a year ago.

"I used to go out there with one of my school friends", she said. "One evening my friend and I were in his house and we looked at each other and it kicked off from there. I guess it was love at first sight!

"Legally, I would have to wait two more years to get married in a Catholic church, so then we talked about it and we decided to get married by Bishop Cox in Birr."

Shelly said Gregory's family were all "lovely people" who were very happy for the couple. They are planning a full church wedding when Shelly turns 18.

She added: "He knows I'm a Traveller, but it makes no difference to him anyway".

Her mother Bernadette admitted she would have preferred Shelly was "much older" on her wedding day, but added: "That is what she wants and so I'm happy for them".

She added: "Just because he is from Poland doesn't make him any different to the rest of us because we are all the same at the end of the day."

Gregory said: "I heard that Travellers only marry Travellers, but I don't believe it anymore. Shelly's family are the only Travellers I met".

He is teaching Shelly Polish, while Gregory already understands when she speaks in Cant, the Traveller language.

Bishop Cox is most famous for ordinating Sinead O'Connor in 1999, as well as performing exorcisms.

He is happy to accommodate Travellers as young as 16 getting married as long as their parents consent and are at the ceremony.

Although popular, the weddings have no legal standing and court exemption orders are required by the State.

"My phone is always hopping off the hook", Bishop Cox said.