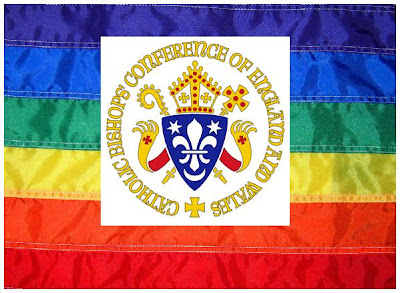 A document from the Catholic bishops’ conference of England and Wales on the pastoral care of persons suffering from homosexual temptations omits the Church’s key teachings on sin and redemption, a British pastor claims.

Fr. Ray Blake, a parish priest and blogger living in Brighton, called the pamphlet from the Marriage and Family Life Project Office “troubling” in that it fails to mention the teaching of the Catholic Church calling homosexuals to live a life of chastity.

“As priest in Brighton,” Fr. Blake wrote, “I spend quite a bit of time trying to help people make sense of their sexual attraction, I really find this document troubling.”

The pamphlet, entitled, “What is life like if you or someone in your family is gay or lesbian in their sexual orientation? ... and what can your parish family do to make a difference?” offers a help line for “families facing difficulty in coming to terms with the sexual orientation of a spouse, parent, child or sibling.” However, it makes no mention of ministries, like the group “Courage,” that are geared to helping those who are seeking to leave the active homosexual lifestyle.

The omissions, rather than the content, are the problem says Fr. Blake. The priest says the pamphlet heavily emphasizes “acceptance” of persons suffering from homosexual inclinations, but entirely omits the fact that such persons are called to live chastely.

“We used to speak a lot about ‘meeting people where they are at,’ which is fine,” Fr. Blake wrote. “Christ does that, but he calls us break from sin and to live a new Life in him.”

The pamphlet recommends that parishes use “bidding” or intercessory prayers thanking God for the “gift of sexuality” and includes quotes complaining, “The continual message from the church is that homosexuality is so, so dreadful. Our gay son just hasn’t stood a chance.” Another asserts, “My brother is gay; the church has been very intolerant of him.”

The pamphlet, Fr. Blake wrote, “seems to lack something important. Could it be a relationship with the person of Jesus Christ?”

The pamphlet’s authors have used language and recommendations that closely reflect the work of the secularist and decidedly anti-Catholic homosexualist movement. It instructs pastors to “check the local school policies on bullying and equality” and warns them “not to assume that everyone is heterosexual” and to “reflect this in language and conversation.”

In recent documents produced by the British government, teachers and others involved in education are told to avoid “heterosexism,” which is any assumption that heterosexuality is natural or normal. Faithful Catholics have warned that, particularly in the context of schools, the language of “anti-discrimination,” “equality” and “human rights” are being used to silence any dissent from the secularist and anti-family movement’s dogmas.

With the passage of the Labour government’s Sexual Orientation Regulations, Catholics and others who adhere to traditional moral norms, are increasingly under threat. Fr. Timothy Finigan, a Catholic theology professor and founder of the Association of Priests for the Gospel of Life, told LifeSiteNews.com that with the “equality” doctrine asserting that homosexuality is the equivalent of race, any criticism of homosexual sex, such as calling it “sinful,” is by definition discriminatory against homosexuals. Fr. Finigan warned that the language of the gay lobby is being used by government to silence Christian teaching with regard to homosexual activity.

The Catholic Church in England and Wales has, since the 1960s, been regarded as one of the most left-leaning national bishops’ conferences in the Catholic world. In the country’s leading Catholic archdiocese, Westminster in London, despite a promise to shut them down after years of complaints, a parish is continuing to offer “gay Masses.” During these masses homosexuality and “gay marriage” are praised and Catholic teaching on chastity and sexuality is banned.

Thank God for this Conference of Bishops

It is heartening to see some of the Church hierarchy begin to reflect the sense of the faithful on issues of homosexual orientation and relationships.

About two-thirds of Catholics-in-the-pews disagree with Rome’s teachings on homosexuality, according to the surveys. The great majority of Catholics support either domestic partnership or full marriage rights for same-gender couples. Thus the bishops of England and Wales, more than Fr. Blake, reflect the true teaching of the Church -- the Ecclesia, the People of God.

Fr. Blake is right about one thing: all of us are called to have a personal relationship with Jesus Christ. But where in the Gospels does Christ say one word about homosexuality? Nowhere. And there is abundant theological work which debunks the interpretations of other Scriptural passages which purport to condemn same-gender relationships.

In the United States each year, an estimated 1500 gay teenagers commit suicide, too ashamed to accept themselves as God made them, and unable to handle the bullying and discrimination. Groups like ‘Courage’ only reinforce this shame-based destructiveness. Christ spreads healing, not pathology.

Much better for gay Christians to look to the example of Father Mychal Judge, ‘the Saint of 9/11,’ who wrote in his journal about accepting himself as a gay man: "I feel no guilt, none whatsoever today -- I feel on the train Home. I am at peace finally. This is what You want me to do, Lord... You, You alone, brought me here. I have nothing to fear. Thank You, thank You, Lord !"