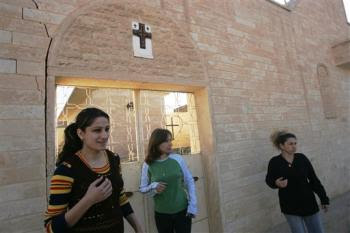 Both church spires and mosque minarets rise above the low-slung houses.

"The people here look out for each other — Arabs, Christians, Kurds, Yazidis. If all of Iraq was like this, it would be a great place," said 1st Lt. Jeremy Glosson, leading a U.S. Army patrol through Tal Kaeef's medieval-like alleys.

And yet, many Christians here say they want to flee a town where their ancestors have lived for generations and, if possible, to abandon a country where their religion has survived for some 2,000 years — longer than in Europe — but one they fear is growing ever more violent.

"Nobody is threatening us, but it's still dangerous. All the Christians want to leave. I want to leave now," said Robert Esho, a 35-year-old resident, reflecting a national community on nerve-edge, where even small-scaled incidents can spark panic.

Last month, in the nearby northern city of Mosul, about 10,000 Christians by government estimate bolted from their homes after several killings and intimidating incidents, generally believed to have been carried out by Islamic militants.

Most recently, their fears were heightened when gunmen attacked the home of a Christian family in Mosul, killing two sisters and wounding their mother. The attackers booby-trapped the house and an Iraqi policeman was injured in a blast when he came to investigate, U.S. officials said.

Some Mosul residents are filtering back, but others are living with relatives in the safer countryside or have sought refuge in neighboring Syria despite government pledges of financial support and protection.

The recent flight of Christians occurred against a backdrop of violence against the faith.

Churches, priests and businesses of the generally prosperous, well-educated community have been attacked by militants who denounce Christians as pro-American "crusaders" — a reference to the European knights who warred against the Muslim Middle East in the 9th through the 11th centuries. Some Christian women now wear Islamic veils for fear of being set afire or killed.

In an exodus which began after the 1991 Gulf War, and escalated dramatically after the U.S.-led invasion in 2003, Iraq has lost more than half its Christian population of some 1 million.

In Mosul, now Iraq's deadliest city, this year opened with coordinated attacks on churches and monasteries as Christians celebrated Epiphany. The body of Paulos Rahho, the Chaldean Catholic archbishop of Mosul, was found in March following his abduction by gunmen after a mass.

"Over the last six to seven years we have endured only tragedy so the future may prove to be just like the past," said Youell Adam al-Reekami, owner of a dry goods store here whose brother lives in New Zealand. Some relatives left for Syria two months ago.

Tal Kaeef, with some 20,000 people, has been largely spared the worst violence, having made an effort to isolate itself from Mosul, some 12 miles to the south, and retain its traditional tolerance.

The town includes many of Iraq's ethnic and religious groups — the Kurds, who dominate Iraq's northernmost provinces; much-persecuted Yazidis, adherents of a faith that combines ancient beliefs with elements of Judaism, Christianity and Islam; Christians of several ancient sects; and Sunni Muslims, who make up the majority.

It is encircled by a defensive earthen wall erected in recent years and protected by Iraqi forces and Kurdish militia, said Glosson, a platoon leader with the 3rd Armored Cavalry Regiment from Huntsville, Ala. Violence in general is rare here, with Glosson and police saying there were fewer than six incidents in the past year.

But Tal Kaeef has not been able to cloister itself from the general atmosphere of fear.

When a car bomb exploded this summer at the town's police station, Christian families living nearby fled their homes in the mistaken belief that they had been the targets, the lieutenant said.

And last month, some 200 Mosul families found refuge here, further fueling anxiety. These included Hanny Kamel Nasser, his wife, five children and other relatives, who fled to the town after his cousin was killed by gunmen in Mosul "just because he was a Christian."

Nasser said he was more afraid of the climate of violence in Iraq than the religious divide between Christians and Muslims.

"There is just no law in this country. Judges won't sentence criminals because they are afraid," he said. "How can there be a future here, in a culture like this? "

Nasser said he wants to sell his vehicle repair shop and move his family to where many are fleeing — villages farther north and west in Nineveh province which are predominantly Christian and protected by the Kurds and even their own armed guards. Some Christian groups harbor what is probably a hopeless dream: carving out an autonomous zone in this region.

"It is all terribly sad," said al-Reekami, talking of the diaspora of his people and Tal Kaeef's deep Christian roots.

Down a narrow, winding alley crowded with square, stone and mud houses with high walls and inner courtyards — variously reminding Glosson's soldiers of medieval Italy and biblical times — stands the imposing Church of the Sacred Heart of the Chaldean Catholic Church, some of whose members still speak Aramaic, the language of Christ, and recognize the authority of the pope.

Others in the town adhere to the Ancient Church of the East of the Assyrians, descendants of an ancient empire who converted to Christianity in the 1st century A.D., six centuries before the coming of Islam.

"We used to live as one family. Here is my neighbor and brother, an Arab. And here is my Kurdish friend," said al-Reekami, gesturing toward two old men, who both nodded assent. "I have known some of these people for 50 years."

Nasser described how his Arab neighbors stopped masked intruders from trying to break into his house after the family fled. Others from his al-Saah neighborhood told assailants, "If you want to kill the Christians you must kill us first."

Maher Jebraeel Asmar, who returned to Tal Kaeef from Detroit to help his pregnant wife with the process of entering the United States, also expressed hope.