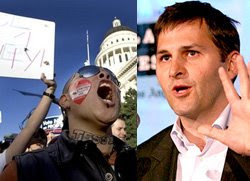 The fallout from the victory of California Proposition 8 continues as individuals and churches that supported the measure to restore marriage as a union between a man and a woman face social pressure and reprisals.

The U.S. Catholic bishops have offered support to the Church of Jesus Christ of Latter Day Saints following opposing activists’ “explicit and direct” targeting of the denomination.

Many churches which supported Proposition 8 have been targeted by protests, while some donors who supported the proposal have faced social derision and have even been forced out of their jobs.

Richard Raddon, Director of the Los Angeles Film Festival since 2000, has resigned his position following controversy that resulted from reports he donated to the Proposition 8 campaign.

“I feel honored to have worked with such a wonderful group of people at the Los Angeles Film Festival over the last nine years. I am proud of our accomplishments. And I am proud to have worked at Film Independent, an organization whose principles and values of diversity and artistic integrity I cherish,” Raddon said in a statement.

Professing his belief that all people are entitled to equal rights “no matter race, religion, or sexual orientation,” he explained:

“As many know, I consider myself a devout and faithful Mormon. I prefer to keep the details around my contribution through my church a private matter. But I am profoundly sorry for the negative attention that my actions have drawn to Film Independent and for the hurt and pain that is being experienced in the GLBT community.”

The Board of Film Independent, which runs the Los Angeles Film Festival, said in a statement it accepted Raddon’s resignation “with great reluctance.”

“Rich’s service to the independent film community and to Film Independent has been nothing less than extraordinary,” the statement continued.

“He has always shown complete commitment to our core principles of equality and diversity during his long tenure. It was through his leadership that the Los Angeles Film Festival has grown into a formidable and exciting showcase for talented artists and diverse voices. We are sorry to see him go.”

The U.S. bishops have also commented on the aftermath of Proposition 8 in a November 21 letter from Archbishop of Louisville Joseph E. Kurtz, chairman of the bishops' Ad Hoc Committee for the Defense of Marriage, to Thomas S. Monson, president of the Church of Jesus Christ of Latter-day Saints, also known as the Mormon Church.

Archbishop Kurtz wrote on behalf of the committee, expressing “prayerful support and steadfast solidarity” for his church and its members.

“We have watched with great distress in recent weeks as some members of society have reacted intemperately, and sometimes even violently, to the decision of the voters in support of Proposition 8 in California. We have been especially troubled by the reports of explicit and direct targeting of your church personnel and facilities as the objects of hostility and abuse. We pray that prudence and healing may prevail.”

The bishops’ committee offered them “profound gratitude” for their role in “the broad alliance of faith communities and other people of good will” who joined together to protect marriage while also “witnessing to the honor and respect due to every human person created in the image and likeness of God.”

The Mormon Church is also being targeted with legal action.

The California Fair Political Practices Commission on Monday ruled that it would inquire into a complaint filed by the activist group Californians Against Hate, the Associated Press reports.