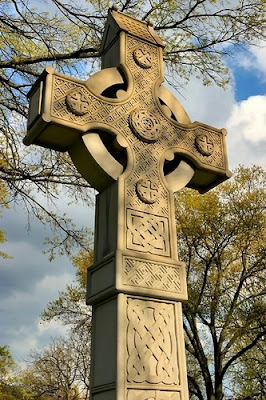 They include the historic and highly-adorned High Crosses at Monasterboice, Co Louth, regarded as the best examples of their type.

Experts are looking at a number of options to preserve the three Celtic crosses for posterity, including moving them altogether and covering them with glass.

The Monasterboice High Crosses have been described as “astonishing” by the film-maker Rob Vance who is to feature them on RTÉ’s Secrets of the Stones series.

"They are astonishing works of art, probably the finest being produced in Europe at that time - the carver was a genius,” he said.

But archaeologist Margaret Gowen has warned that the deterioration in their condition has to be halted.

“That will come in stages and every aspect of how best to secure the crosses is being considered”.

Erecting glass domes over the crosses would take several years to complete, she added.

Traffic in the area – from tourists and because of the proximity of Drogheda and the M1 motorway - has been contributing to the deterioration in the condition of the Celtic crosses at Monasterboice.

“The site cannot be promoted for tourism on a great scale at the moment, that's one thing we know, it just can't cope with big numbers,” said Ms Gowen.

“The traffic situation presents a far greater impact than I had imagined”.

Meanwhile, an archaeologist has defended a decision by the Office of Public Works to remove ancient 'cursing stones' from altars on the monastic island of Inishmurray in Co. Sligo for conservation.

Jerry O'Sullivan said the OPW project was "a good and necessary measure”.

The stones are to be replaced with replicas and the originals will be brought to Belfast for treatment by a professional conservator who specialises in the preservation of medieval stone.

The stones will be returned to a conservation building in an old schoolhouse on Inishmurray when they have been treated.

Mr O’Sullivan is the co-author of a new book on the historic island entitled Inishmurray - Monks and Pilgrims in an Atlantic Landscape which was launched last week in Sligo by Minister of State for the Environment, Michael Finneran.

The book is the first comprehensive survey and documentary record of Inishmurray's history and archaeology and is the first of four volumes to be published.

Speaking at its launch, Mr. O'Sullivan said he accepted that “the romantic will be dismayed” by the OPW plan to have the ‘cursing stones’ conserved and replaced by replicas but said the alternative was worse.

"Posterity will not thank us is we allow treasures of early medieval art, carved in stone, to crumble in the salt winds and winter frosts of our north Atlantic winters or, worse, if we leave them to be taken away by one of the criminal gangs that specialize in supplying stolen antiquities".

Fears have also been expressed for the future of a derelict medieval church in Co. Down.

St Bronach’s Church in Kilbroney is estimated by historians to date from the 15th century and was built on the site of the religious community that St Bronach is said to have founded in the sixth century.

The ruins have no roof and are covered in ivy and the site also contains a well, an eighth century Celtic cross and a graveyard.

Canon Dermot Jameson of the St Bronach’s School of Celtic Studies has warned that the building needs urgent work to safeguard it.

“We are particularly concerned about the west gable wall because it is leaning out by at least 18 inches,” he said.

Supporters of investing money in the site claim it could help the local tourist economy because Christian heritage is being promoted as a Northern Ireland Tourist Board signature project.

But a threat to a fifth-century holy well established by St Brigid in Dublin to baptise pagans has receded after the Railway Procurement Agency confirmed it will not be demolished to make way for the Metro West light-rail system.

The RPA said the proposed route for the new tram system will be altered so that the holy well - the water from which is reputed to eye ailments - is not touched.

The well is located beside the Fonthill Road in and the RPA had originally proposed relocating it to make way for the Metro.

Now, however, the Agency is to alter the route of the tram to accommodate public concern.