Iraqi bishop tells Pope of shock at violence against Christians 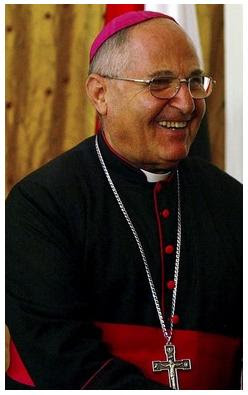 The Christians of Iraq were shocked when Muslims started trying to drive the Christians of Mosul out of their homes in early October, an Iraqi bishop told Vatican Radio after meeting Pope Benedict XVI.

Chaldean Auxiliary Bishop Shlemon Warduni of Baghdad met the Pope on November 26 at the end of the Pope's weekly general audience.

The Pope told the bishop: "Iraq is in our hearts. We constantly remember the Christians, praying for them and for peace in the country."

Bishop Warduni told Vatican Radio that between 700 and 800 of the 2,500 Christian families who had left Mosul in October had returned after the Iraqi government sent troops to the city to protect Christians.

"This whole thing made us very sad because we have lived together in peace for centuries," the bishop said. "During all the wars, our churches and our homes were open to Muslims and to all others."

Referring to the violence that claimed the lives of 13 Christians in October and led to the destruction of many homes, the bishop said, "It was a shock that Christians were attacked in such a diabolical way."

Bishop Warduni said the United States, Europe and the United Nations did not do enough to get the Iraqi government to act immediately when Muslim gangs began going through the city, using megaphones to tell Christians to leave Mosul.