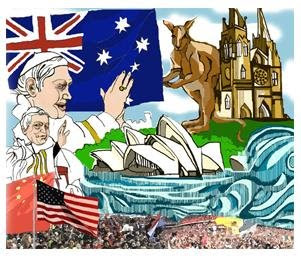 As a result, the NSW Auditor-General is calling on the state government to undertake a full review of the event, so it can more accurately plan for future large scale events held in the state.

The initial $20 million estimate for hosting the event, based on 150,000 pilgrims visiting Sydney, was revised in February last year to $89.2 million just for services provided by the NSW Government, according to an independent evaluation, the Auditor-General noted.

In January 2008, funding was approved to secure Randwick racecourse for the event, with State Government funding totalling $23 million, the Commonwealth Government kicking in $20.5 million and the Catholic Church agreeing to commit $10 million.

"The final revised budget was $142 million," the Auditor-General's report disclosed, but actual outlays are likely to reach a more modest $120 million.

This $120 million figure does not include a host of costs incurred by other government agencies, so the true cost of hosting the event might never be known.

The Department of State and Regional Development estimated the benefits from hosting the event totalled $152 million, although the department itself cast doubt on this estimate, arguing that, since the full cost had not been clarified, any accurate assessment of the benefits was difficult.