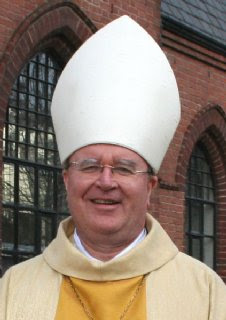 The work of an English bishop in helping to regulate the trade in small arms and light weapons took on a new importance this week as the Vatican’s permanent observer to the U.N. spoke out about the need to prevent illegal arms trading.

Bishop William Kenney, an auxiliary bishop in Birmingham, is a leading figure in the Gothenburg Process, an ecumenical initiative which aims to promote dialogue between parties involved in the arms trade.

Bishop Kenney, who previously served as Bishop of Stockholm before he returned to his native Birmingham in 2006, has been involved with the Gothenburg Process since it was founded in the 1990s.

He is now the international chairman of its steering committee, and its work to promote dialogue in the industry may now take on new importance after the Vatican’s apostolic nuncio to the United Nations, Archbishop Celestino Migliore, spoke out about the arms trade in a recent address to the U.N. Security Council.

In his address, Archbishop Migliore said illicit arms trades had turned tensions into armed conflicts and had compromised peace and development. The Vatican official said the Holy See supported the U.N. General Assembly for adopting a resolution which spells out initial steps that need to be taken in order to better regulate the trade and transfer of arms.

Archbishop Migliore added that the Vatican “shares the grave concern of conflict-ridden countries” where the illicit arms trade and its production hinder the peaceful settlement of disputes and prolong conflicts.

Speaking to The Universe, Bishop Kenney said the Gothenburg Process dealt solely with the legal supply of arms but that this supply often turned into a “slippery slope.”

The organization started after he was approached by a layman, Peter Brune, who expressed concerns over the growing proliferation in the arms trade following an initial decline after the Cold War. He felt the Churches needed to speak out on the problem.

“What happens in many cases is that these legal arms eventually end up getting sold on. There are perhaps slight infringements at first, but it is a slippery slope.

“You have weapons being sold from countries such as Russia and China and then there is also sheer criminality such as weapons being stolen from armies.”

Bishop Kenney said the Gothenburg Process grew after an initial first conference in 2001. “The thing took off,” he said. “What we have done is encourage a dialogue between the users and the control authorities, that is, the political powers and the producers.”

The outbreak of wars, Bishop Kenney said, always resulted in problems with small arms in the future. Instances such as the current crisis in the DR Congo were classic examples of weapons which had once been bought legally now being used illegally, he explained.

“Weapons are stolen and no one notices until it’s too late to do anything about it,” he said.

While there is much work ahead, the fact that the parties involved in producing, regulating and using small arms are talking represents progress. Bishop Kenney said the organization had succeeded in getting people to reflect on the issue, and to get the control authorities, users and producers to look at the ethical position of using the weapons.

But in a stark summary of the problem, he added: “More people have now died as a result of small arms and light weapons than have died from nuclear weapons.”